Domboshaba villagers in Matobo district were allegedly assaulted by anti-riot police on Sunday forcing them to seek refuge in the mountains, after they chased away some illegal miners who had invaded a protected area.

The illegal miners had invaded the village which is part of the Matobo Hills World Heritage Site to prospect for gold.

However, the move incensed the villagers who chased them away.

The anti-riot police were reportedly deployed and allegedly assaulted the villagers and in the process arrested two of the villagers who were identified as Thembelani Sibindi and Martin Khumalo.

After the beatings and threats from the armed police officers, over 20 people – were forced to flee their homes and seek refuge in the mountains.

Matabeleland South Police Spokesperson, Chief Inspector Philisani Ndebele, told CITE that no one including police has a right to beat up villagers for upholding the law.

“How can we condemn these villagers when we are fighting illegal gold panning?” he asked.

“You must tell those villagers to phone me. I cannot comment first without a report, as the villagers must file a report of assault. Assault by another person, whether it is by a soldier or police officer is a crime because they would have committed an offense. Everyone must be able to report.”

Chief Inspector Ndebele added that he was yet to receive a report on the matter.

“I have to confirm that with the council at Matobo,” he said.

In an interview with CITE, one of the villagers, an elderly woman, who slept in a cave at the mountains, said they were afraid of being shot and taken away like two other villagers.

She also expressed fear that the illegal miners they evicted might have poisoned a key water source that also caters for their livestock in the area.

“Two villagers, Martin Khumalo and Thembelani Sibindi were taken by the police and we don’t know where they are. We had to flee to the mountains for safety, running away for protecting our environment.”

The woman said the illegal gold panners first came to the village in January, and sought permission to mine from the village head but villagers refused.

She noted that villagers were informed by the Matobo Rural District Council Chief Executive Officer Elvis Sibanda that the group had applied for land on August 25, 2020 but was surprised to see them move in.

“On September 6, 2020, the CEO told us these illegal miners would vacate the area between September 7 and 8, 2020, as officials from the Environment Management Authority (EMA) and National Museums and Monuments of Zimbabwe will come to remove them,” she said.

But by Sunday, illegal miners were still there with no sign of vacating, which motivated the villagers to take action, she added.

Contacted for comment, Sibanda said he was unaware that villagers were beaten but confirmed the local authority had received a mining prospectus from Mazinahue Syndicate.

He noted that the site in question was a protected area, classified as a World Heritage Site.

“The Mazinahue syndicate came with papers signed August 25, 2020 by the Ministry of Mines and Mining Development. Of course that land is a World Heritage Site and it is within Matopo Hills. It’s correct I did visit the area to have an appreciation of what was taking place but I didn’t address anyone,” he said.

Sibanda said Matobo council had submitted its submissions to the province raising its concern against mining in that area.

“That place is a world heritage site and if interfered with will affect tourism in the area and province plus the country is a signatory to World Heritage Sites (administered by the United Nations Educational, Scientific and Cultural Organisation – UNESCO,” Sibanda noted. 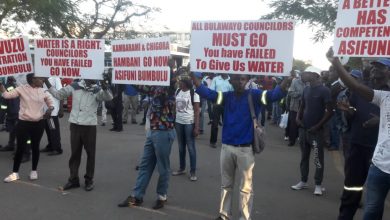