The Municipality of Gwanda is working on completing the construction of a 5 mega litre reservoir in Spitzkop in bid to solve water challenges faced by the residents in the suburb and other surrounding areas.

The project started about 7 years ago but due to lack of funding, it has stalled.

However, in 2019 the local authority received devolution funds from the government and channelled them to the construction of a new primary school at Hlalani Kuhle area, installation of water pre-paid maters as well as the water reservoir.

The municipality had targeted at completing the reservoir project in December but was affected by the high inflationary environment in the economy.

Besides funding, the annual shutdown of the contractor had a huge bearing leading to the scaling down of progress at the site.

According to the Municipality’s Engineer, Ndabezinhle Thwala, every year the construction industry goes on annual shut down at the end of the year and they start operating by the end of January.

“We hope as soon as the contractors come back, they will speed up the project so that the reservoir starts functioning as soon as possible,” said Eng Thwala.

The Municipality’s Chamber Secretary Hlupho Mhlanga said the tank is left with few stages for it to be completed.

Spitzkop residents who spoke to CITE said they hoped the project will be completed soon as they have been struggling to access potable water.

“We hope the council will speed up the project so that it solves the water crisis that we are facing”, said a resident.

“It’s now more than 15 years and we have been staying here without water and proper sanitation as well as ablution facilities. Imagine more than 5 000 people resorting to the same bush to relieve themselves on a daily basis.

“When the municipality tested the reservoir tank we were happy to see water coming out from our taps,” said Nare. 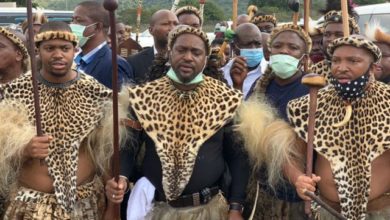