Africa is experiencing extinction of its endangered species and plants, an indicator that more conservation efforts need to be done while at the same time, making sure people benefit,  conservationists have said.

Extinction occurs when species are diminished due to habitat fragmentation, global change, natural disaster, overexploitation of species for human use, or evolutionary changes in their members – genetic inbreeding, poor reproduction, the decline in population numbers.

The moment of extinction is generally considered to be the death of the last individual of the species.

According to Data on Earth’s Endangered Species, Zimbabwe has about 77 species that are endangered and at risk of extinction if not conserved.

Muruthi indicated looking back 20 to 100 years ago the number of species that Africa is losing through extinction is increasing.

“You can see yourself going towards that as a country or continent as populations get smaller and smaller. You start from species that are common, then species that are critically endangered and then the next step is extinction is forever,” he said.

Muruthi underscored that in 2012, an animal as large as the western rhino found in Cameroon and Chad was officially declared extinct.

“There are many other species you can think about that are less than 500 individuals in Africa and all those are heading towards extinction. When a specie is extinct – you lose that particular animal forever, our children’s children will never see them.

The re-introduction of species or restoration of habitats is ‘very’ expensive, said Murithi who argued that the focus was to avoid a mistake of allowing extinction to happen.

“Birds have gone, animals are at the verge of extinction. The whole continent for example has less than 7 000 wild dogs. You will be surprised or not but there are only 500 individuals of the Ethiopian wolf in two key populations in Bale and Simien mountains of Ethiopia. The others are scattered so 500 is a very small number, the next large extinction in Africa will be part of that. This is a global concern and Africa should be careful,” he said.

He added losing species that people did not know much about, was “a tragedy,” as medicinal plants could be lost.

For instance, Murithi noted butterflies and insects played a big role in the ecosystem.

“When you see a butterfly – an indicator specie disappearing, something wrong is being done in that area. Maybe there’s pollution in that area, maybe somebody has removed the essential habitat for one stage like lava eggs for the butterfly. If that butterfly is involved in the pollination of your food crops there is big trouble coming,” said the conservationist.

“Indicator species are very important, even in a river if you find a certain fish is not there there’s big trouble. I always tell people where I live in Nairobi that when you pollute a river, you drink the same water. People who live in cities throw away garbage toss into the river and weekends go to the rural areas to visit families who draw water directly from the river -they make you tea and you say ‘hmm nice.’”

“The way we produce and consume food, the choice of energy and the blatant disregard for the environment entrenched in our current economic model, is pushing us to the limits of the continent,” she said.

“Despite the importance of biodiversity to our livelihood and wellbeing, our quest for socio-economic development has caused tremendous loss of biodiversity. The rapid economic and human population growth has come at a very high ecological cost.”

Mufute said while efforts were made to attract huge investments and financial capital, the same care was ‘often’ not done to preserve natural capital.

“Agricultural expansion, settlements, infrastructure development, resource extraction are driving the degradation of forests, rivers and grasslands. The resulting habitat loss and fragmentation threatens ecosystem goods and services upon which both people and wildlife depend. The World Economic Forum estimates human activities have caused losses of approximately 83 percent of all wild mammals and half of all plants,” she said.

“Of course, the risks emerge in form of poor planning, design, coordination, operation, management, and most important Africans’ attention and interest that so far, we seem to have outsourced to foreign media correspondents, NGOs, and donors.” 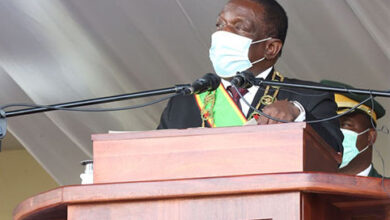 Mnangagwa to diasporans: Come back home and we build Zimbabwe