The International Coalition against Coronavirus (ICAC) has stepped up its campaign to stop Covid-19 vaccine trials in Africa and is urging governments to turn them down.

ICAC, which has chapters across southern, west and central Africa, said it was redoubling efforts against the vaccine trials in the region after South Africa began its first trial on June 24.

The Covid-19 vaccine trials are underway in Johannesburg, and Pretoria.

It was developed by Oxford University’s (UK) Jenner Institute to inoculate two thousand South Africans while another trial is reportedly waiting approval in Kenya.

But the vaccine trial issue has been plagued by controversy, with the current debate in Africa centring on a race row.

“The fight against COVID-19 and its vaccines in the field must be redoubled because we have all noticed that some countries such as South Africa have already started human trials of COVID-19 vaccines despite all the talk about the risks for us Africans,” said Toure Moussa Zeguen, ICAC’s International Executive Secretariat in a memorandum dispatched to African country chapters.

Zeugen said for the next few days, Africans must be determined because the anti-vaccine trial fight would be tough.

“Only our ability to mobilise will make the difference,” he noted and urged country chapters to strengthen their structures in the fight against the pandemic.

“Since citizens can now move in some countries, we invite each other to create the structures of popular mobilisation in your countries. Let us wake up so that we are not caught in a rush,” said the organisation’s executive secretary.

“We do not want Covid-19 vaccines in Africa. The tests should start in countries like Spain, Brazil and America where the pandemic is killing a lot of people. We are urging African governments to resist the testing of their people. These drugs will cause unnecessary deaths to our people,” said Mkandla.

“We want to tell the developed countries that Africa is not a guinea pig where clinical trials can be willy nilly tested on human beings. People should be given adequate information before they are tested. They should be informed of the side effects of the vaccines,” said Ngwenya.

The race row in May over the Covid-19 vaccine trials was sparked by two French doctors who were discussing a trial in Europe and Australia – looking into whether a tuberculosis vaccine would prove effective against coronavirus.

The two doctors, during the TV debate, both agreed a vaccine should be tested in Africa too, with one saying: “If I can be provocative, shouldn’t we be doing this study in Africa, where there are no masks, no treatments, no resuscitation?”

Director-General of the World Health Organisation, Dr Tedros Adhanom Ghebreyesus, responded to that, saying, “It was a disgrace, appalling, to hear during the 21st Century, to hear from scientists that kind of remark. We condemn this in the strongest terms possible, and we assure you that this will not happen. The hangover from a colonial mentality has to stop.” 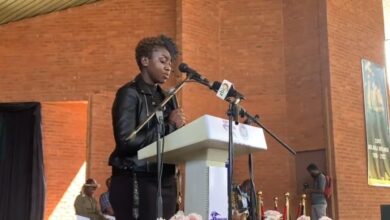 Cont Mhlanga: Family to set up foundation in honour of the late arts doyen