Four men, including a soldier, who allegedly set ablaze three trucks at Ashys service station in Bulawayo’s Nkulumane 12 suburb during the Shutdown protests in January had their application for discharge thrown out.

The quartet, which is out on bail, has been remanded to March 13 for their defense case.

Western Commonage magistrate Tancy Dube, who last week, turned down an application to dismiss the case, ruled that the case will now proceed to trial.

They were part of the mob that protested on January 15 during the stay away skirmishes which were marred by vandalism of property and looting.

Another co-accused Ntandoyenkosi Moyo (27), who is also a soldier was allegedly shot in the abdomen by the owner of the garage Ashton Mpofu during the protests and had to seek medical attention at a local private health facility.

The quartet through their lawyers from Zimbabwe Lawyers for Human Rights, argued that the state had failed to provide compelling evidence linking them to the crime.

“Your Worship, this court hasn’t been helped with any incriminating evidence. The evidence presented to this court does not at all show how the arrested people were identified and linked to the offense alleged. As such may the court discharge them as they are being held under ill-fitting conditions,” said the lawyer.

Constable Marufu, the arresting officer, testified that he only arrested three people after getting instruction from his superior.

He said at the time of arrest only three people were in the car and has no knowledge of the arrest of the fourth person.

“We mounted a stop and search roadblock. I stopped them but they identified themselves as soldiers. Since there was a lot of commotion going on I assumed they were there on duty so I let them pass.

“However as they were about to leave I got a message from my superior that they should not be let to pass as they were being sought by the police in connection with the protests. That was when I ordered them to park their vehicle and subsequently arrested them, ” he said.

The Investigative officer Mgcini Sibanda told the court that the accused persons gave various alibis in an effort to evade being linked to the offense.

“Mhou said he arranged with Ndlovu and Moyo to meet at Ashys and deliberate on how to get to work since there was no transport. They alleged that while together, Moyo got shot by a stray bullet hence they called Mungwadi to come and assist them with transportation to the hospital,” said Sibanda.

He confirmed to the court that he did not follow up with the police station and barracks hospital to check if the arrested people’s alibis were genuine.

Prosecuting, Thembeni Mpofu said accused persons were part of the people who were protesting at Ashys garage. 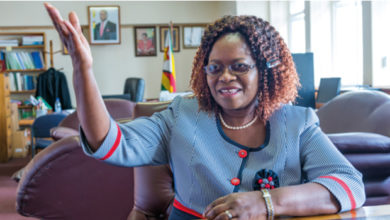