The Zimbabwe Electoral Commission (ZEC) claims its electoral processes are well structured, transparent and some of the best in southern Africa.

This assertion came after ZEC dismissed widely held beliefs that the commission is partisan and rigs elections in favour of the ruling party ZANU-PF.

Instead, the electoral commission insists that the criticism levelled against it emanates from people who do not understand the law governing ZEC operations and challenged opposition legislators to reform the same law in Parliament.

“We are independent and impartial. It’s unfortunate. I think because of the narratives and some speculation happening but at times if you look at the commission it would be good for us to be taken into account according to the law,” said ZEC Spokesperson, Commissioner Jasper Mangwana, speaking at a Twitter space on the March 26 by-elections: Lessons for the 2023 Elections organised by CITE in partnership with the Zimbabwe Electoral Support Network (ZESN) Tuesday evening.

The commissioner also insisted that “ZEC does not rig elections.”

“I will be waiting to see evidence on this. I was moving around in Harare to see and visited agents of all political parties, asking them and all said they were happy, (voting) was quite clear and transparent including how people are coming in to vote. This issue of vote stuffing and ballot papers disappearing is not a reality because of how the electoral process is structured,” Mangwana said.

Mangwana claimed some complaints that were raised against ZEC were “not real matters” that deserved attention.

“Some of the issues raised to be honest with you, are not real matters with the commission. It’s just that the commission becomes the easy punching bag in the event that maybe something does not suit a specific narrative. So, the easy way to blame is the commission,” he said.

The commissioner said ZEC tries by all means to “always” engage stakeholders and make sure it delivers free, fair and credible elections according to the law.

“Because the moment we let such narratives move…if you look at this past by-election you know the incident that happened at Highfield at Mizha School where one of our presiding officers was really obstructed from conducting her duties. It was alleged that maybe she was marking the ballots. You know very well that before a polling station opens these papers are declared and everyone – agents and observers look at them to see if nothing has been marked but people peddle such information.”

Mangwana said as a way of educating people about electoral processes, it would soon be conducting a social media conference on elections.

“To make sure that we take some of these social media legends and gurus to really go through how the elections are done in the country, demystify some of the reasons that are causing voter apathy. We are the people’s commission and we are ready to make sure that we deliver and work according to the laws of the land,” said the spokesperson.

He also challenged stakeholders who have an issue with the law to say they must go into parliament and advocate for change.

“Make the changes in parliament, so that whatever issues you think are not quite clear, you can change them because you are the lawmakers. As a commission we can only deal according to the law,” Mangwana said.

“However, we have made recommendations in terms of changes of the Electoral Act, some of them include registration and regulation of political parties because we think it’s quite key for us to create an environment that is conducive for free and fair credible elections.”

Mangwana added that ZEC was looking forward to hosting an election conference with youths in order to engage them and sell the correct narrative of what is happening and how the electoral processes are done. 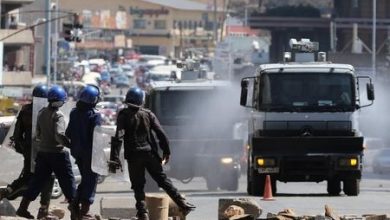 Maintenance of Peace and Order Bill – Comments and submission