Opposition political party, ZAPU, Tuesday forced the temporary shutdown of the St Anne`s Mission Hospital nursing school in Matabeleland South following an outcry from villagers that locals were being sidelined in the recruitment process.

Currently, the nursing school at the Roman Catholic-run institution has seventeen students who are all believed to be from outside the region.

At the hospital, the delegation met with the administrative staff led by Father Hlakanipha Mbongolwane and Matron Patience Ndlovu.

“We are here to support the local community who said none of their children were accommodated at this local institution yet it’s meant to assist the community. Not one local student was accepted but we know there are qualified children. Such a situation will disadvantage the patient, the trainee nurse and the local community,” advised ZAPU’s southern region communication director, Patrick Ndlovu.

He added that the sidelining of locals in local institutions gave credit to the stereotype often repeated by politicians that people in Matabeleland are uneducated.

“Children will have no choice but cross over to South Africa or Botswana since there are no opportunities for them here. Your actions are going against government policy because it said devolution must be in place,” Ndlovu noted.

In response, Father Mbongolwane said the group was within their rights to express themselves on the issue.

“We understand your concerns, it’s good that you express yourselves and stand for your rights there is no harm in that, for that reason we respect this and as the Catholic Church we represent all,” he said,

However, Father Mbongolwane advised that ZAPU should also take their concerns to the relevant authorities at government level.

The matron, aware of regulations set by the Ministry of Health and Child Care, said it had to be understood that recruitment of nurses was done online and no one had a hand in that.

“If we understand the registration process itself and who recruits, we will know that Brunapeg has no role in recruitment. We are employees and we report to the Ministry of Health and we fall under Plumtree District Hospital.

“We don’t place rules on how to recruit students, the law comes from the head office and whatever we do, we follow the ministry regulations. We are just employees and not your enemies,” Ndlovu explained.

She added that online recruitment was advertised in the press, notifying all potential applicants.

“Under this e-recruitment, applicants enter their names and qualifications, then the computer will start the selection process. It is the computer that chooses who is called for an interview, who goes to which hospital and sets the day of the interview. No one says anything since it is done online.

“What we know is the students we have here are as a result of the e-application registration, administered by the ministry of health for all the hospitals in the country,” she said.

When asked if the institution had received a communique from the health ministry over the placement of these students, the matron said she was “unsure as she did not work at the nursing school.”

The delegation then later moved to the nursing school and forced the lectures to stop.

A similar action was taken at Mpilo Hospital in Bulawayo in October when the political party mobilised some residents to stage a sit-in at the hospital demanding that the government reverse the recruitment of non-locals.

The government later bowed down to pressure with the Health minister announcing that the government will decentralise the e-recruitment of Registered General Nurses (RGN) to the provinces. 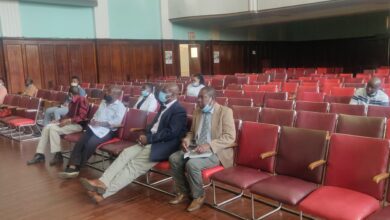