Government and Bulawayo City Council (BCC) have been urged to be transparent about the source of contamination that triggered a diarrhoea outbreak in Luveve suburb that has so far claimed 13 deaths and affected thousands of residents.

BCC said 13 specimen results were sent to the National Microbiology Reference Laboratory in Harare as well as CIMAS laboratory locally and believed it was a case of diarrhoea.

The council also disputed a government claim that the Luveve water had traces of human waste.

While presenting a report before the Parliamentary Portfolio Committee on Local Government, Public Works and National Housing and the Thematic Committee on Peace and Security early this week, BCC said it was yet to establish the source of the contamination.

Speaking at a donation of food items to Luveve residents on Friday, ZAPU National Secretary for Social Welfare, Mildred Mkandla urged authorities to disclose the source of contamination to residents.

“Tell us the truth about what happened in Luveve,” she urged.

“We were gutted to hear that people died and others are still sick, after drinking the water, something that was unheard of in Bulawayo. We need to know what happened because up to today, we are still asking the same question as to what caused such a disaster.”

Mkandla said residents had a right to know the exact cause of contamination and what measures would be taken to prevent such from happening in the future.

“We still don’t know what is being done about the crisis but what we do know is some residents are still sick. Therefore residents need to know what happened. We also need to know what must be done so that such a situation never happens again either here in Bulawayo, other cities and in the rest of the country,” she said.

BCC has said it would extend the waiver of exempting all residents in the city with diarrhoea from paying user fees at local authority clinics as long as water-shedding exists to avoid the spread of another outbreak.

The ZAPU official acknowledged infrastructure development was lagging due to economic hardships but that did not stop authorities from saying the truth.

“As residents, we are asking for the truth. The council and government must tell people the truth about what happened in Luveve. Both authorities must also tell people the steps taken to avoid such from happening again in Luveve and other suburbs.

“If it is the water infrastructure or piping system that broke down, has the council fixed those? Was the crisis caused by a shortage of water purification chemicals? Is so what steps are the authorities taking to procure the chemicals. Families cannot continue living in fear of such an outbreak or every time they draw water,” she said.

Mkandla noted she had been resident in Bulawayo for years but such a water crisis had not happened before in the city.

“I am 74 years but until this day I have never heard of such happening,” she said.

She also encouraged residents to hold the BCC and government to account until they revealed the source.

“It is your right and within your power to ask and hold the authorities to account about what happened and what will solve this matter because it must be resolved. To those who lost their loved ones, please be comforted and to those who are still unwell, be well soon,” noted the ZAPU official.

Contributions for the donation came from ZAPU members based in the United States. 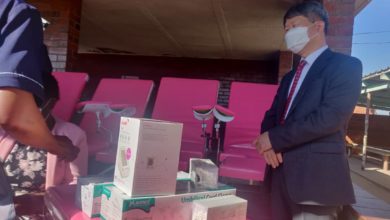