Dialogue between the country’s major political parties, ZANU-PF and MDC, aimed at resolving the country’s political and economic crisis remains in limbo with both sides still digging-in at the expense of the suffering Zimbabweans.

ZANU-PF and the MDC are still yet to find each other following the controversial 2018 polls won by the former, while efforts to bring the two protagonists to a discussion table have not yielded much fruit.

While President Emmerson Mnangagwa and his party ZANU-PF have preferred the lukewarm Political Actors Dialogue (POLAD) to resolve Zimbabwe’s crisis MDC leader, Nelson Chamisa, has instead rejected that demanding an independent facilitator.

POLAD constitutes of ZANU-PF and all other political parties, which contested the 2018 polls, most of which do not have representation in Parliament.

Both Mnangagwa and Chamisa have openly said they were ready to engage each other but what has stalled the commencement of the talks are the conditions being set by the two.

“We want to engage with President Mnangagwa for the betterment of the people,” said Chamisa while addressing party supporters in Harare last week.

“We do not want a Government of National Unity, but sharing the vision, the union of ideas that take the country forward.”

However presidential spokesperson, George Charamba, said Mnangagwa would not participate in any talks outside POLAD as per the demands of Chamisa.

“POLAD is the only framework and there is no other,” Charamba was quoted as saying.

“POLAD incorporates all political players as equals regardless of organisational status or results of 2018 elections. Chamisa cannot at one level demand talks between equals while at the same time creating exclusion and inequality for others. POLAD will not involve outsiders. It’s a national dialogue managed nationally and involving nationals of Zimbabwe.”

But, since the launch of POLAD in February, nothing tangible has been realised with the economic situation in the country having further deteriorated.

“The delays (in ZANU-PF and MDC coming together) are part of political games being played by both sides at the expense of citizens while the country is imploding,” said Thomas Sithole, a political analyst.

“ZANU-PF knows that the other political parties are nonentities in the political space in terms of power, following and influence but only needs them to neutralize MDC’s influence. It therefore needs them to legimitise the process only and it’s clear that dialogue with them without the MDC is not going to result in anything.”

He said it was regrettable that POLAD had not realised any results.

“There is need for both ZANU PF and MDC to be sincere and to put their differences aside and put national interests and the fate of citizens on the table.”

Fortune Mlalazi, another political analyst, said it was not always easy for political parties to find each other, citing the bickering prior the formation of the coalition government between ZANU-PF and then two formations of the MDC in 2009.

“You would realise that the nature of all political dialogues is always tricky and difficult to kick-off simply because parties want to set up conditions,” said Mlalazi.

“In fact that is the real dialogue of it to bring them together on the table because they always want to put up conditions.”

He added that the most logical thing was for talks to involve only political parties with representation in Parliament. 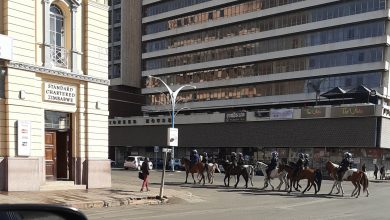 Police in show of force to thwart MDC Byo demo