Young people need to take responsibility for their actions and not
blame their circumstances on past generations.
These remarks were made by the Open Society Initiative for Southern
Africa (OSISA) executive director Siphosami Malunga while delivering a
public lecture in Bulawayo yesterday.
The public lecture was facilitated by the Women’s Institute for
Leadership Development (WILD) and was titled, “Building Responsible
Citizenry: Youth Participation and Leadership for Democratic
Governance and Viable Economy.”
“If you are going to do something, do it now because there is no time
to blame the previous generation as they have already fulfilled their
purpose in the Liberation struggle,” said Malunga.
“You have to acknowledge that our leaders have failed this country but
as young people you should be innovative”.
He said despite societal injustices young people have to be
responsible and should develop a sense of duty.
“As young people you should be willing to sacrifice something and be
able to disrupt society in order to fulfill your purpose just like the
previous generation did,” Malunga said.
Malunga added that while education is important, it is not the only
avenue to success.
He also implored the young people in attendance to respect women in society.
“I saw Thokozani Khuphe being called names in the just ended election
because she is a woman and this was the first election were women
where treated unfairly,” said Malunga
Meanwhile, media personality Patience Phiri who was moderating the
public lecture encouraged the young people to believe in themselves.
“I am a proud African woman who is defying all odds, so do not let the
people tell you who you are but tell them.” 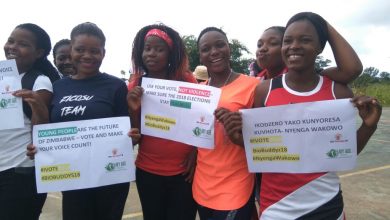