The politicisation of the COVID-19 vaccination program remains a serious challenge in the country, which is highly likely one of the leading causes of low vaccine uptake, and this has a bearing on marginalized communities such as Zvishavane and Mberengwa which are already lagging behind in terms of information.

Whilst there are many factors at play such as vaccine shortage, limited vaccination points in some areas among others, the use of vaccination as a political tool by the ruling party and opposition has led to many people either partaking or shunning away from vaccination.

Zimbabwe first received 200 000 Sinopharm vaccines from China in the first batch, and later on received 75 000 doses of Covaxin from India and 20 000 Sputnik-V vaccine from Russia. Doses of the western AstraZeneca were also expected in the country.

The administering of Chinese vaccines has seen ruling party ZANU PF giving a green light whilst the opposition parties have openly criticized the vaccines, vouching for western vaccines.

All these events have sparked rumours of how countries like China and Russia have strong political and economic interests in the country, and how their goods, particularly China, are often substandard or fake which makes the public sceptical about the effectiveness of their vaccines.

However, Midlands Provincial Affairs Minister Larry Mavhima, who is also a member of the ruling party, maintains that the vaccines are safe and that there are no political interests whatsoever.

“As a government, we are conducting mobile vaccination. Wherever people are gathered we always make sure there are health workers to carry out the vaccination program. This is to ensure that everyone has access to the vaccine,” said Mavhima.

He added that they are mainly targeting rural areas as they are the ones with less access.

Misinformation and the use of the COVID-19 vaccination as a political tool weighs heavily on rural areas which already have low uptake because of fewer health centres, transport challenges, poor road networks, distance barriers among others, which have always been a challenge way before the outbreak of the coronavirus.

Zvishavane District Development Coordinator Darlington Chokera, who is also the Chairperson for the COVID-19 taskforce in Zvishavane, says there is a need to do more information dissemination so as to dispel any false information that might have spread in communities.

“Vaccination is not and will never be a political exercise, maybe we need to do more awareness campaigns and provide correct information. It is very unfortunate if there are people who think it’s political,” said Chokera

He added that health staff based in wards, environmental health experts and village health workers have to play their role in educating communities on the vaccine.

“We will also make use of councillors and traditional leaders. If resources permit us we might as well put a mobile team which will go and educate people at the identified problem areas,” he said.

Minister of Health and Child Care who also doubles up as the country’s Vice President Constantino Chiwenga was one of the public office bearers to get vaccinated.

Recently, rural communities called for COVID-19 vaccination information centres but government is yet to heed the call, hence people continue to rely of untruthful sources and conspiracies.

A survey conducted by UNICEF highlights that mistrust, low vaccine confidence and low intention to take the vaccine cuts across all demographic groups, and the involvement of politics into the program is not doing any good to Zimbabweans who already have a history of intimidation by politicians.

Health practitioners have also expressed their concerns on the low uptake of the vaccine saying most people are sceptical about the Sinopharm vaccine which is currently in the final stage of testing.

A survey by Zimbabwe College of Public Health indicates that most Zimbabweans (49%) do not trust the current government to provide a safe effective coronavirus vaccine.

This highlights the need for an effective communication strategy to establish public trust.

“People are getting information from social media platforms and other unverified sources. The health ministry should work with civil society, churches, politicians and traditional leaders in carrying out vaccine literacy activities so that people do not passively consume all the information at their disposal,” he said.

Rusike also said all vaccines are safe for humans.

“The vaccines have been tried, tested and seen fit for human beings. With the new Indian variant people must be cautious and get vaccinated before they fall victim of the third wave. Someone who is vaccinated is safer than one who is not,” said Rusike.

Another health expert Doctor Tinashe Manzvii said there is a lot of information going around, be it political, history of vaccines and many others, but said the COVID-19 vaccines, like any other drugs have been tested for safety.

“Information that should go out there is that the vaccines, before being released for public use, go through many processes to prove they are safe and effective. So all the myths, beliefs and misinformation for whatever reason or interest are not true,” he said.

A third wave of the coronavirus is looming in the country following the discovery of the deadly Indian variant which first hit Kwekwe a few weeks ago, however health officials say it has been contained. 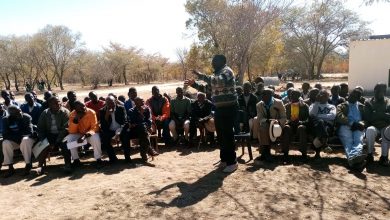