Bulawayo magistrate Franklin Mkhwananzi remanded the pair to July 22 after freeing them on a $100 bail each.

They are being represented by Maqhawe Mpofu of Mlaudzi and Partners.

According to the state papers as presented by George Rufumoyo, the two councillors assaulted Town Clerk Christopher Dube with open hands, fists and kicked him several times all over his body in his office.

“On July 11, the two councillors went to Dube’s office to serve him with a letter of suspension. They were in the company of Felix Mhaka, Clayton Zana, Tawanda Ruzive, Pilate Moyo, Lilian Mlilo, Batirai Dube and Jabangwe,” said Rufumoyo.

He said an argument ensued resulting in Kambarami and Chigora assaulting Dube.

Kambarami on Thursday suspended Dube on allegations of misappropriating council funds, a decision that has since been revoked by the mayor of the city Cllr Solomon Mguni.

The move by Kambarami triggered an uproar from residents, who on Friday staged a demonstration against his conduct.

Minister Moyo said there are prescribed channels on how to deal with grievances within council chambers which Kambarami should have followed. 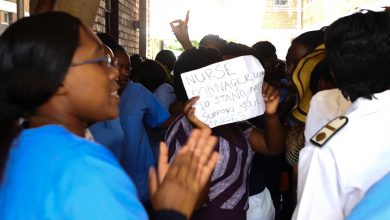