The Thokozani Khupe led MDC-T has said all economic saboteurs must face the music saying continuous blaming of sanctions for economic collapse by the country’s leadership was not helpful.

It said a cocktail of past disastrous economic policies and “our own acts of omission and commission” are to the root cause for the meltdown.

In a statement to coincide with the second SADC Anti-Sanctions Day commemoration on 25 Sunday, the opposition lamented the suffering of the people and workers who are bearing the brunt of sanctions.

He added “Economic saboteurs must be brought to book” without naming any.

Zanu PF is accused of using the sanctions mantra as an excuse for its economic failures.

The ruling party has always attributed economic, humanitarian and political crises in the country to sanctions which were imposed at the turn of the millennium following the controversial fast-track land reform.

Some say corruption which is rampant in the country is the leading factor choking efforts to revive the collapsed economy.

Western states including the United Kingdom, the United States and members of the European Union argue that the sanctions are measures meant to coerce Zimbabwe to return to constitutionalism, rule of law and good governance.

“As a pro-poor and labour backed party, the MDC-T laments the suffering of the people and workers who are bearing the brunt of sanctions.”

He added, “The economy is partly hamstrung by sanctions due to restrictions faced by corresponding banks and difficulties in accessing new capital as Zidera gives the United States of America veto powers on the Boards of the main Multi-Lateral bodies such as the IMF and World Bank.”

Mashakada said respect international law in its governance architecture was key in removal of sanctions.

“Finally let us desist from blaming sanctions for our own acts of omission and commission.

In calling for the unconditional removal of sanctions we must be honest and accept that some of the economic policies implemented in the past stoked inflation, the budget deficit, currency and exchange rate volatility.  Let us fix the issues we control and not just mourn about sanctions.”

However, MDC-T credited itself through its late founding president and former Prime Minister Morgan Tsvangirai for a massive reduction of people on sanctions list.

“Through our contribution to the re-engagement efforts during the GNU (2009-2013), most travel restrictions were removed and to date, less than 3 people remain on the Sanctions travel ban list.

“Thanks to the wisdom of our late icon Dr Morgan Richard Tsvangirai who made a clarion call for the removal of what he called “all restrictive measures”.

Mashakada also claimed that his formation “fought” for a new Constitution in 2013 which now provides for compensation for developments on the land through the enactment of the US$3.5 billion Global Compensation Deed signed on 29 July between government and former farm owners.

The billion-dollar compensation agreement is expected to bring finality the emotive land issue as envisaged by the country’s constitution. 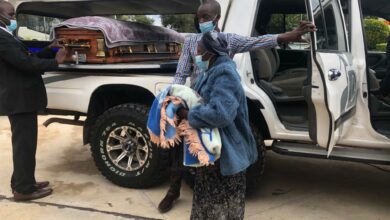 Emotional send off for Elvis Nyathi