The Ministry of Youth, Sport, Arts and Recreation has shockingly revealed that it had no sporting infrastructure under its care until last year, when some facilities were transferred over to it by the Local Government Ministry.

This was revealed by the Minister responsible for the portfolio, Dr Kirsty Coventry, when she appeared before members of the Senate on Thursday after Senator Tsisti Muzenda asked what the government’s policy was regarding the infrastructure of different sporting facilities which is deteriorating.

The standard of several sporting infrastructure across the country has been declining due to a lack of funding reportedly caused by the economic challenges and cash flow challenges affecting the country in general.

“For example, I am looking at the Chitungwiza Aquatic Complex, Magamba Hockey Stadium and other sports facilities, especially golf courses which are now in a sorry state.  It seems a lot of these infrastructures have been neglected for a very long time, which is unfortunate because a lot of money has been put into that infrastructure,” Senator Muzenda said.

In her response, Dr Coventry disclosed that the sports ministry ‘never’ owned infrastructure but currently there were some processes taking place to make transfers over to them.

“In terms of the infrastructure, as a Ministry, we never had any infrastructure falling under us until last year when the Aquatic Centre, the National Sports Stadium and the Hockey Stadium were transferred over to us from the Local Government.  Still today, that has not been completed.  There are specific departments that sit within Local Government that need to be transferred over to us.”

Coventry said the transfer was an ongoing process but as for the Aquatic Centre, the National Sports Stadium and the Hockey Stadium, there are plans even within the budget and special budget that we set aside.

“Those three will be the focus within our Ministry to make sure that we get adequate funding to get them back to state of the art.  It will take a bit of time. The other sports infrastructure in and around community centres, we have put a policy in place with our youth interact centres where we are working with communities to identify spaces that have sports and arts centres,” she said.

The minister claimed her ministry has a new policy to refurbish the existing infrastructure and build new facilities.

“We have the capacity for this year to target 40 of these around the country, four per province.  We will continue pushing for more and more of those recreational spaces to be jointly done, funding coming from the Ministry and oversight coming from the community,” Dr Coventry said. 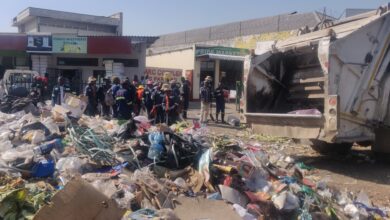