A truck belonging to Zimbabwe Gas Company rammed into two stray elephants near Sinamathela Camp, killing both of them.

Zimbabwe Parks and Wildlife Management Authority (Zimparks) spokesperson Tinashe Farawo confirmed the incident adding that investigations were on-going to establish the cause of the accident.

“There was an incident where two elephants died after a road traffic incident in Hwange,” Farawo said without giving the time.

“I understand that they were sub-adults elephants, but that will be established when out investigations are concluded.”

However according to an eye witness, the driver hit the two elephants afterhe lost control of the vehicle.

“The area is infested with wild animals and these drivers at times don’t exercise caution,” a witness said.

“Since it was at night, we gathered that the driver was speeding and that is what caused the accident. When we went to the scene in the morning, we found two elephants dead, a calf and a sub-adult female and we suspect that it was a mother and it’s calf.”

Farawo said the accident was caused by elephants encroaching to settlements areas due to congestion.

“Our population in that park is way above its carrying capacity, and that is why we are encountering such incidencies.”

Hwange national park is home to more than 45 000 elephants, holding the second largest population in the Kavango Zambezi Trans frontier Area (KAZA) according to the 2014 Pan African Elephant Survey.

Zambezi Gas is one of the mining entities extracting coal together with Makomo Resources near the Sinamatela Camp in Hwange National Park.

The tusks have since been confiscated by Zimparks while the elephant meat was distributed to ZC workers. 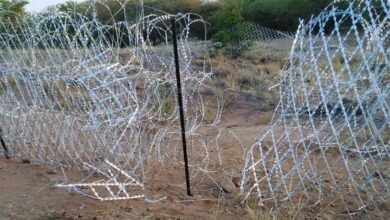