Stakeholders in Bulawayo have said the planned introduction of new banknotes and coins by the Reserve Bank of Zimbabwe (RBZ) will not address cash shortages as long as economic fundamentals are not in place.

The central bank announced yesterday that it would introduce new banknotes while also increasing withdrawal limits with a view to addressing cash shortages and lifting the burden on the transacting public.

The new notes, which are not bond notes, RBZ governor, John Mangudya, said would be introduced in denominations of $2 and $5 as well as $2 coins to avoid larger denominations that may lead to inflation.

Mangudya further said the new banknotes and coins would be pegged at 1:1 with bond notes in terms of value, adding cash supply would be increased over the next six months.

“We agreed to increase fiscal cash in circulation from current $768 million to a level, which is commensurate with the rest of the world,” said Mangudya.

“Currently our money supply is $19 billion. Our money in circulation, which is notes and coins, is about four percent. Internationally what is pertaining is about 10 to 15 percent. We want to ensure that this economy has enough cash.”

Priston Levison, a resident of Bulawayo said with politicians having influence in the circulation of money, he was skeptical of the apex bank’s move in addressing cash shortages.

“The Zimbabwean crisis is not an economic problem but a political problem,” he told CITE.

“Money is likely to be printed and given to individuals, not the general populace. Injection of cash into the market will lead to an increase in USD:Bond  and printed notes exchange rates.”

“First of all we are worried about the conflicting statements on this issue from RBZ and the Finance Minister,” said Ncube.

He said the move was not likely to adequately address cash challenges.

“We feel this will not address the current cash shortages as long as measures are not in place to curb hard cash brokerage market activities,” said Ncube.

“The new notes are in danger of circulating outside the formal banking system, the same way as the bond notes. The new notes denominations are still $2 and $5, with the highest denomination being $5. We won’t see any marked difference in cash shortages.”

Ncube maintained the cash crisis was but a symptom of fundamental economic structural problems.

“The primary issues that should be addressed are production. There is no way an injection of cash will spur or trigger production. The absence or the low production in the economy is the one giving rise to the cash brokerage market. Cash becomes a tradable commodity in place of real products,” added Ncube.

Economist, Dumisani Sibanda, said the printing of new notes and coins would boost the informal economy, where cash is the mode of transaction.

“Prices in this part of the economy (informal sector) are more attractive than in the formal economy,” said Sibanda.

“Increasing cash available will shift more economic activities to this sector. An increase in cash availability will put more pressure on the cash-based exchange rate leading to a decline. Depending on how much cash they inject into the economy the cash rate will decline proportionately pushing demand for more cash.”

Sibanda added that the demand for cash would not stop until the ratio of imported goods to those produced locally shifted with a higher ratio being produced locally. “It will be difficult to achieve a position of equilibrium in the short term given that fixing productivity will not be achieved in the short term. The authorities are focusing on dealing with symptoms; they’re not addressing fundamental problems bedeviling the economy,” added Sibanda 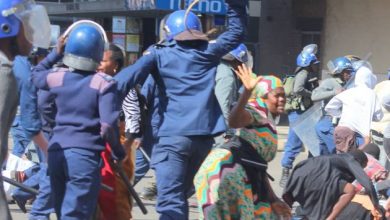 Police crack down on Harare protestors