ARGUABLY, when a person ages they become more of a little child who needs special attention, good food, favourable health facilities and a caring person.

They become so fragile such that like a newborn baby they need to be handled with care. They also become vulnerable to most diseases hence they develop a number of underlying illnesses like blood pressure, heart defects, back pains, diabetes, eyesight problems among others.

Such problems need an alert health caregiver who will attend to any call from the ageing soul.

Well, but then what happens to 102-year-old Joseph Indonala at Entembeni old people’s home, an institution that is struggling to put food on the table let alone provide medical assistance to the old during the Covid-19 lockdown?

Does Indonala have the luxury of getting proper meals and proper medical attention?

This is an illusion for the 102-year-old Namibian national who is part of 46 old people looked after at Entembeni Old people’s home in Bulawayo’s Luveve suburb.

He can still recall the rosy days when he would have three to four meals a day before the introduction of the lockdown.

“When l came here in 2002 things were not that bad. For years we could afford proper meals and l remember having porridge early in the morning, tea at break, lunch and supper. We would even have fruits. Everything just turned upside down when this monster called lockdown came, we no longer have proper meals, look we are having chunks every day,” said the old man struggling to open his eyes.

Indonala and his colleagues now survive on a single meal per day.

“We only have a cup of black tea in the morning and supper in the evening. People here are also struggling, sometimes they might get us some lunch when lucky,” he said.

Not only does he struggle with food but also access to medication.

The centenarian who suffers from back pains and eyesight problems said it is hard to go for check-ups or to get medication during the lockdown.

“Medicines are costly, and we used to rely on Luveve council clinic for our medication, but for now some medicines are not available. There will be a need to go and see a private doctor in town but we don’t have the money,” he said.

An investigation by this publication revealed that access to food, protective clothing and medication tops the woes faced by these vulnerable groups.

While much focus is directed to addressing the rampant Covid-19 virus that is ravaging the world, vulnerable groups remain forgotten.

A blind eye is turned to the fact that besides the Coronavirus, hunger has become another threat to human life.

“Most of our people are from neighbouring Namibia, Botswana and Zambia and they don’t really have relatives here in Zimbabwe who can sometimes visit them with food and some resources. It is solely our responsibility to feed and clothe these people. Honestly ever since the introduction of lockdown last year, we have been struggling to feed them and have reduced their meals,” she said.

Mwamungu said the home is donor-funded hence with the lockdown, donations drastically decreased which has seen them going for months without any donation.

“Before lockdown, we had the likes of IPEC (Insurance and Pension Funds Commission), University students and communities coming to assist with donations. As you know that gatherings and movements are not really allowed, people are still sceptical about visiting homes with donations,” she said.

The concerned administrator said the majority of the older people have chronic illnesses that need constant check by doctors, but there is no money for that.

“Most of them here are sick with different illnesses ranging from BP, diabetes, eye problems and all. They need to constantly check with the doctor but we don’t have the money. Now they just depend on some painkillers which also put their life at risk,” she said.

The home also needs protective clothing against Covid-19 including masks and sanitisers.

“Our workers here are voluntary, and for them to feel free to work here, they should first feel safe. They are working with older people who have high chances of contracting the virus, and surely they need adequate protection. They need enough PPEs. Also, even our old people need the same to curb the spread of this virus,” she said.

Her list of needs and wants remain a mere wish as the home does not have a solid source of funding.

The home even struggles to pay rates with their water supply being temporarily closed last year as they owed the city council huge sums of money.

“IPEC then helped us to clear a $15000 Zesa bill but we still owe Bulawayo City Council, NSSA and Telone huge sums of money,” she said.

Facing almost the same challenge, a source from Thembiso children’s home revealed that there is a dire need for food aid as the home is struggling to put food on the table.

“You know such issues won’t be spoken about maybe because authorities will be trying to cover up but truth be told these children are struggling. There is no food here and sometimes it’s so heartbreaking to see them fight for even some porridge,” said the source whose identity can not be revealed because he is not authorised to talk to the media.

“They also need clothes and blankets as we are approaching winter but food should be the first priority, ” added the source.

Sharing the same sentiments with Entembeni old people’s home, the source revealed that since the introduction of the lockdown, donations decreased.

“We no longer see people coming with donations except for special cases here and there. It shows that even those who used to help us are also facing challenges to source donations and also maybe in terms of travelling to this place,” said the source.

The problem cuts through child-headed families who are struggling to put food on the table and are vulnerable to Covid-19.

“Long back we used to receive grains and then we switched to money and we were receiving $1 500. Although it was not regular at least we got something. It was not even to buy groceries but it was better off than nothing. However, we lastly got this in November and nothing has been said about it,” she said.

To earn a living she has resolved to chopping firewood and selling to people in her suburb.

“It’s not safe in the bush because there are many cases of rape but l have to do it. This also exposes me and my baby to Covid-19 because l will be meeting a lot of people whole looking for customers,” she said.

Nkala’s business also decreased because of the lockdown as movement is minimised.

“Police officers do not want to see someone just loitering around so this affected my business. I only rely on my known customers which means if they don’t need firewood on that day then l don’t get money to feed my baby and siblings, ” she said in deep thought.

Nkala lost her parents in an accident two years ago and she has been taking care of her two 12-year-old twin siblings and her 2-year-old baby.

“None of our relatives comes to assist me. My sisters look up to me for everything. I used to depend on that government cushion but these days it’s not coming,” she said.

Bulawayo Provincial Social Welfare officer Fanwell Dzoma during an online indaba on transparency and accountability of Covid-19 resources revealed that government is failing to cushion vulnerable groups with over 16 000 households in Bulawayo in dire need of food.

The groups that include those living with disabilities, old people, people with chronic illnesses and those with high dependency ration groups among others are registered under the cash for cereal program which replaced the drought relief grain program.

Dzoma blamed lockdown and cash shortages for failure by the government to cushion vulnerable groups.

“There is an inconsistent distribution of the cash handouts due to cash shortages and the lockdown. Just like grain this was supposed to be done on monthly basis but the last time people were given cushions for October and November,” he said.

Dzoma admittedly said the money was not adequate to cover the basics.

“At first it was ZWL$300 and reviewed to ZWL$800 then ZWL$1500 but still it’s not enough at all to sustain a household. Besides being little amounts, irregularity of payments makes things worse,” he said.

In an interview, Siphiso Nyoni, a founder of a philanthropist and charity group which used to donate to children homes said due to the lockdown they can no longer source donations.

“We stopped last year because it’s hard to source donations. Usually, we would get food hampers from well-wishers from different corners and even clothes but now you won’t be certain of where these things are coming from. You can take donations and hear that the next time children got Covid-19 from the hampers we brought because maybe the donors would be positive. Besides that, our movements are limited so we can not go around collecting donations. We also want to stay safe so we took a break,” she said.

Nyoni said when they get some money they donate using electronic platforms.

According to a recent rapid assessment conducted by UNESCO vulnerable groups are poverty-stricken and struggling in Zimbabwe.

“Income per month for persons living with disabilities shrunk by 50 per cent ZWL $2 160 per month pre-Covid-19 to $1 080 per month during Covid-19 period. This is against a poverty datum line of ZWL$17 957 per month for a family of five,” read the report.

Political will key to success of free primary education  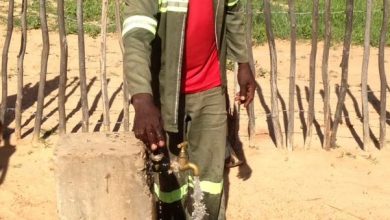