THE MDC Alliance has submitted a dossier to the Zimbabwe Human Rights Commission (ZHRC) detailing alleged human rights violations by the security forces following mass protests against a fuel price hike announced by President Emmerson Mnangagwa a fortnight ago.

According to human rights groups, at least 12 people have been killed since January 14 when a three-day stay organised by the Zimbabwe Congress of Trade Unions turned violent.

Crack army units have been carrying out night raids in high density suburbs of Harare and Bulawayo where they have allegedly been targeting women for rape and men aged between 15 and 65 for torture.

Security forces accuse the residents of looting businesses during the mass stay away.

The government blames the violations on criminals that allegedly seized military uniforms and weapons in Harare’s Epworth and Chegutu when the protests began.

However, in an interim report on the ongoing clampdown submitted to the ZHRC and obtained by CITE titles ‘Of protests, state sponsored crackdown, microwave justice and prisoners of political concise’ dated January 24, the MDC Alliance said it was the biggest victim of the security forces’ heavy handed response to dissent.

The party said five of its legislators and nine councillors had been arrested countrywide during the clampdown.

A staggering 43 MPs and councillors have been forced into hiding after security forces indicated that they were hunting for them, the report says.

“As the situation stands, no one Member of Parliament, councillor or prominent leader is safe and most have gone into hiding,” the party said. “Currently, there is no rule of law, but rule by force.”

The alliance said there were documented cases of women that were raped by soldiers during the clampdown.

“Just yesterday in Hopley, 14 women were raped by soldiers, while four women from Epworth were also raped out of the 13 assaulted people,” the report added.

“Another 28 victims who were receiving treatment were rounded up and taken to Harare Central police station before they were released to the medical facility the next day.

“The MDC is currently compiling details of all MDC members and perceived supporters who have been caught in the crossfire between government and a crackdown on the opposition.

“Others are just too afraid to report and are recuperating from home for fear of retribution.” 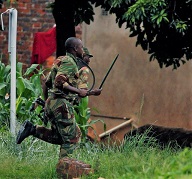 The alliance said events of the last week showed that Zimbabwe was effectively under a state of emergency.

“The MDC is concerned about the continued shrinking of the democratic space and arbitrary arrests and assaults on its party members and its leadership,” the report concluded.

“We call for an immediate end to the de facto state of emergency imposed on the nation by the regime.

“The MDC in all this chaos remains peaceful, and still offers to engage in dialogue in line with the well-articulated MDC five-point plan as the solution to the crisis.”

In a letter accompanying the report and copied to Mnangagwa, the MDC Alliance said its activities have been constrained to an extent that it was not able to hold primary elections for a municipal by-election in Bulawayo’s Cowdray Park.

“The security services have been systematically targeting MDC members for arrest, torture and beatings,” reads part of the letter signed by MDC secretary general Douglas Mwonzora.

“Some of our Members of Parliament including our national organising secretary are currently in custody.

“Our point is that demonstrations were carried out by members of the public including members of Zanu PF.

“Targeting the MDC members only becomes discrimination on the basis of political affiliation.

“It must be emphasised that the MDC as a lawful political party has a right to exist.  The actions of the security services amounts to attempts to decimate the party.  This is totally unacceptable.”

MDC Alliance also complained about mass trials, bias by the State controlled media such as the Herald and ZBC as well use of live ammunition by security forces during the protests.

On Thursday, the ZHRC released strongly worded statement condemning the conduct of the security forces and urged an end to the impunity, in a rebuke that angered Mnangagwa’s government.

Suspension of by-elections goes against the principles of democracy: ZHRC