A 31-year-old man, Thubelihle Moyo, from Pumula South suburb in Bulawayo was allegedly assaulted by police officers enforcing the Covid-19 lockdown regulations in the high-density suburb as he dropped off a ZUPCO bus on Tuesday evening.

His crime, and that of the other commuters he was with, is that they had breached the curfew which starts at 6 pm.

They had dropped off from the bus at 8 pm after spending hours in the queue waiting for the bus, the only permitted public transport under the lockdown following a blanket ban on private operators.

Apart from the dusk to dawn curfew, citizens who are not part of the essential services are required to stay at home, while businesses operate from 8 am to 3 pm.

Moyo told CITE in an interview that he was assaulted with batons by the police officers leaving him with serious injuries and a damaged cellphone.

“I left my workplace around 5 pm and went to queue for a bus to Pumula suburb. There were long queues and the bus ended up reaching Pumula around 8 pm,” said Moyo.

“I dropped off at the Old Pumula bus terminus with a few other people and had to walk about a kilometre to my home.”

Moyo says they were approached by some police officers, who bellowed, “Ndidzo time dzekuburuka bus idzi, rarai pasi (Is this the time to dropping off from the bus? lie down!)

“They assaulted us using batons and after they were done they ordered to get up and run home. I struggled to run due to the excruciating pain I was feeling and they came for me saying, ‘Uyu arikuzviitisa’ (this one is being cocky) and one of them lunged at him and I tried to block the baton and it landed on my thigh and damaged my cellphone which was in my trouser pocket,” he narrated.

Due to the pain, Moyo had to seek medical attention but faced some hurdles as the doctors demanded a police report to prove that he was assaulted.

“On Tuesday I couldn’t go to the doctor as I was in pain, On Wednesday when I went to the hospital the doctor said they want a police report so I had to go back and file a report at Pumula police station. So today (Wednesday) I managed to go to Mpilo Hospital and they referred me to United Bulawayo Hospitals (UBH) but I had to come back home since it was already late,” he said.

“We are aware of the lockdown curfew but police should communicate and give warnings or even arrest us or make us pay fines, beating us was just uncalled for because personally they really injured me,” he said

Bulawayo Provincial police spokesperson, Inspector Abednico Ncube said they had no formal report about the incident. 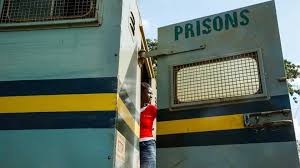