Informal traders in Bulawayo have started receiving NetOne SIM cards as part of preparations to receive COVID-19 cushioning funds from the government, Bulawayo Vendors and Traders Association (BVTA) has revealed.

Through the Social Welfare Department, the government pledged to avail ZWL$600 million to the informal sector to mitigate the effects of COVID-19, with each individual to at least get ZWL$200.

In an Interview with CITE, BVTA executive director, Michael Ndiweni, said the Ministry of Women Affairs, Community, Small and Medium Enterprises Development made a call for the approved vendors to collect their SIM cards at Mhlahlandlela Government Complex.

“We have 77 percent of our people that we sent who were approved to receive the cushioning grant,” said Ndiweni.

“We had rejected the use of NetOne as the sole mobile money transfer. We argued that it was going to short-change those who are using Econet and Telecel, so the government then decided to give out SIM cards to all those that have been approved to receive the grant.”

Ndiweni further elaborated: “The Ministry of Women Affairs, Community, Small and Medium and Enterprise Development has released NetOne SIM cards for the cushioning funds. They have asked members to come and collect their SIM cards that will be used to disburse the cushioning fund, so we have been sending our members as of yesterday (Monday) in batches to their offices in Mhlahlandlela”.

He said at least 396 applications for the cushioning funds were turned down.

“From our side we sent about 1721 names of our members and out of that database that we sent, 1 325 managed to be approved to get the SIM cards but the money is not yet in. People are collecting SIM cards,” he said.

Ndiweni said they were calling on the government to make the call again and re-consider the applications of those vendors who did not make it as they also deserve to be cushioned. 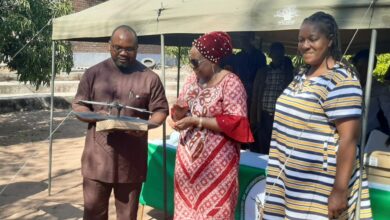