Zimbabwean first lady Grace Mugabe has handed herself over to police after she allegedly assaulted a 20-year-old model with an extension cord in Sandton at the weekend.

“[She] is not under arrest because she co-operated, and handed herself over to police,” Police Minister Fikile Mbalula told eNCA.

She is expected to appear in court later on Tuesday.

Without naming Mugabe, national police confirmed that a case of with intent to do grievous bodily harm was opened against a “prominent woman” after the alleged assault at a hotel in Sandton.

“The investigation into this case has already reached an advanced stage. The suspect in this matter cannot be named because she has not as yet appeared in court. We request that the SAPS be allowed to conduct a thorough investigation and to follow due process,” Brigadier Vishnu Naidoo said in a statement.

The alleged victim, Gabriella Engels said she was visiting Mugabe’s two sons Robert and Chatunga at the Capital 20 West Hotel whom she met through a mutual friend on Saturday.

Engels said a bodyguard asked her and a friend to wait in a separate room before Mugabe allegedly started beating her.

“When Grace entered I had no idea who she was. She walked in with an extension cord and just started beating me with it,” Engels told News24 over the phone on Monday

Engels said Mugabe accused her of living with her sons.

“She flipped and just kept beating me with the plug. Over and over. I had no idea what was going on. I was surprised… I needed to crawl out of the room before I could run away.

“Her ten bodyguards just stood there watching, no one did anything, no one tried to help me.”

Engels said hotel staff escorted her out of the hotel. She immediately tried to open a case of assault at the Sandton police station.

A police officer, however, advised her to seek medical attention first.

She opened a case of assault against the 52-year-old Mugabe on Monday afternoon.

The Capital Hotel Group did not want to comment on the incident.

Engels said she had not been contacted by either Mugabe or her children following the incident.

She said she is unable to “deal” with the trauma she experienced.

“I am a model, with this scar over my face my whole career is ruined,” an emotional Engels told News24.

“I don’t know how to deal with this, but I am trying hard. I am trying so hard to be strong. 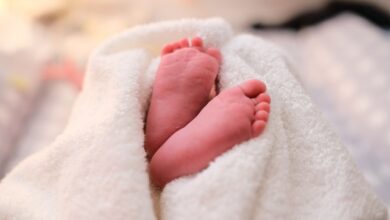 Infant dies after being dumped in public toilet