Leading telecommunications giant Econet has launched a ground-breaking, rural electrification programme worth millions of dollars under the name Ugesi Energy that is set to help transform rural enterprises and create employment.

“Each grid will provide power for businesses and homes in the communal areas,” Moyo said, adding that in the initial phase, small grids would provide electricity to support businesses, local administration facilities at growth points, schools and clinics.

The Ugesi Energy initiative is part of what Econet founder Strive Masiyiwa`s  Re-Imagine Rural, a concept in which entrepreneurs are challenged to start businesses in rural areas.

It also follows the unveiling by Masiyiwa and his wife Tsitsi of a $100 million facility last week, for entrepreneurs to start and scale their rural enterprises.

“This is very much part of that vision,” Moyo said.

“The entrepreneurs need reliable power if they are to build modern businesses. Ugesi is our answer to those in need of power for start-ups such as dairies, poultry incubators, water pumps for horticulture and even small-scale manufacturing and assembly businesses”.

Steward Bank CEO Dr Lance Mambondiani, whose bank manages the administration of the $100 million facility on behalf of the Masiyiwa family Foundation, echoed Moyo’s sentiments and pledged to support the new venture.

“We will provide project financing priority to those who are setting up in the communal areas where Ugesi will be supplying energy,” Dr Mambondiani said.

Moyo said the Ugesi mini-grids will typically provide power to an area within a radius of 5 kilometres to the solar system and will be supported by individual prepaid meters.

He said the mini-grids would generate enough power to support all electrical appliances. The Econet Energy executive said Matabeleland provinces would be the first to benefit from the rural solar energy programme in Zimbabwe.

“Our plan is to roll out at least 10 systems in Matabeleland North and South first, in line with the guidelines we have received from our founder (Mr Masiyiwa),” Moyo said, adding that they had already identified some sites to build the first mini-grids and we would be starting construction in the coming month.

Ugesi Energy, he said, would be based in Bulawayo from where it will run the company’s projects nationwide.

He said the choice of Bulawayo was easy because “as Econet, we feel we are too concentrated in Harare. We want to stimulate the economic revitalization of other parts of the country too”.

The senior Econet executive announced that the ‘City of Kings’ would be the company’s base for renewable energy, adding that the Econet group had a long term interest in the region. 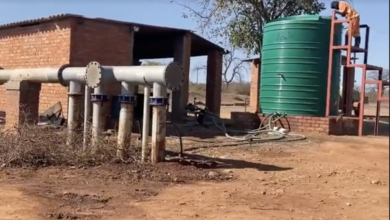