A Canada based Zimbabwean man has embarked on an ardous 800km walk from Bulawayo to Harare and back as part of efforts to highlight the country’s cultural diversity.
Thabo Siziba, 45, based in Toronto left Bulawayo on December 7, enroute to Harare, determined to promote the country`s diverse cultural heritage.
Currently, Siziba is in Kwekwe, having steadily walked over 200 kilometres, all the while educating and highlighting to people along the way the importance of cultural emancipation.
For this walk, Siziba is accompanied by Zenzo Siziba, a 17 year old student and artist Bukhosi Maphosa, both from Bulawayo.
Zenzo recently wrote his Ordinary Level examinations and is a published author, having written three novels.
He has pledged to write another novel after the walk, narrating the responses and experiences the three men have faced on the walk.
Maphosa, commonly referred to as Biko in the arts industry, once did a similar walk in 2014 as a way of protesting the segregation of the artists in Matabeleland and Midlands.
He claimed local artists were receiving uneven media exposure at the main broadcaster, the Zimbabwe Broadcasting Corporation.
CITE caught up with Siziba in an interview by telephone Tuesday, where he described the walk as a great experience.
He said the trio walks for 45 to 60 km a day and are hoping to arrive in Harare either on December 14 or the 15th.
“We wake up in the morning do our prayers to connect with our spiritual strength and with God. Afterwards, we leave our base where we would have put up at 6am to start our walk. We do a continuous walk for four hours, take a short break for 10 to 30 minutes for breakfast.
“Then we continue walking for four more hours before breaking for 30 minutes for lunch. Afterwards we can walk for six or seven hours. Around 6pm it tends to grow dark so we break from the walk but we go into local homesteads to talk to people, villagers and homeowners about our mission,” he said.
Siziba claimed his team has received ‘great reception’ along their journey as people have offered them accommodation and opened their homes to them.
“It has been a great experience we are receiving great feedback from passers on the road who want to know why we are walking even at shopping centres we engage with people and they are excited about the message we are spreading and it is a very momentous time for us,” he said.
However, the cultural advocate, said what was frustrating was trying to make people understand the difference of a tribe and nation, as they often confused the two.
For instance, the notion that Ndebele and Shona are the only two tribes in Zimbabwe.
Siziba said the Ndebele and Shona were two nations, which consists of various tribes within them.
“We are speaking people about people about understanding the importance of one’s identity, the importance of accepting others amongst others in our communities. We speak of the multiculturalism and multi-tribalism composition of our communities. We have to be proud of who we are then together we can begin to move forward by respecting each other’s original identity.
“For many years people have been told there are supposedly two tribes, which is wrong. There is nothing like Shona or Ndebele. This type of message we are spreading is within those two supposedly identities you have been cultured to exist various tribes under them whereby one individual tribe within those two nations has probably been given dominance of language. What we are saying to people is it is time to honour our real identity, proudly own your identity and take ownership of your culture,” said the cultural advocate. 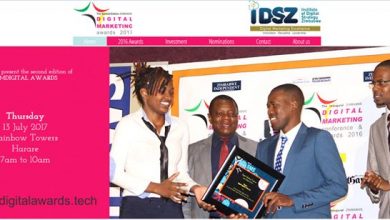 Winners of the Zimbabwe Digital Awards 2017