Chief Felix Nhlanhlayamangwe Ndiweni of Ntabazinduna is set to intervene in the long-standing dispute over the Khumalo headman position which has divided the community.

The feud involves the Mathilika and Zwelibanzi houses which are both claimants to the seat.

Chief Ndiweni held a virtual meeting with Ntabazinduna village heads on Sunday in which the issue was discussed.

The village heads and Chief Ndiweni agreed during the meeting that the issue had brought about a crisis in the community.

“The crisis of credibility centred around which Khumalo House was the rightful heir to the headmanship of Ntabazinduna- the Mathilika House or the Zwelibanzi House,” said Chief Ndiweni in a statement.

He said it was agreed during the meeting that the crisis must be addressed urgently for the well-being of the Ntabazinduna community.

“In this light, Chief Ndiweni advanced that he would exercise his authority as contained in the Traditional Leaders Act Part III Headman 8 Appointment of Headman “Subject to subsection (2), the minister shall appoint a sufficient number of persons nominated by the chief as Headmen for each community to assist the chief to properly carry out his duties. Thus, the Headman-ship matter of the House Khumalo is being placed within this procedure, in order to establish, which House has legitimacy to the Headman-ship,” read the statement.

Meanwhile, Chief Ndiweni said all power and authority that was delegated to Mathilika Khumalo, who has been performing the headman duties have been revoked until the dispute is resolved.

“Mathilika Khumalo is not being suspended or being placed in the procedure as contained in the Traditional Leaders Act. However, in accordance with the provisions contained in the Traditional Leaders Act Part II , 6 Delegation of Chiefs Functions; 1 and;2;- A Chief may delegate all or any of his functions to a Headman within the area of the Headman’s jurisdiction. The delegation of any function by a chief in terms of subsection (1 ) shall not divest the chief of that function and he may at any time revoke any order given by a headman in the exercise of that function.”

“Thus, all power and authority that have been delegated to Mathilika Khumalo are hereby revoked with effect from Sunday 30th October 2022, at 10 am. That means that all the duties of a Headman as contained in Part III,9. Duties of Headman; Subsection ( 1 ) a – k, Subsection ( 2 ), Subsection (3 ) have all been revoked meaning that Mathilika Khumalo is still a headman but that is all,” read the statement.

He said for now Mathilika Khumalo does not possess any power or authority that comes with the title or position of a headman.

“He cannot order or instruct a village head on any matter, he is not allowed to attend the closed Traditional Leaders meetings with village heads and Inkosi Nhlanhlayamangwe Ndiweni, he cannot order or instruct any member of the Ntabazinduna Community on any matter,  he cannot adjudicate on any case or dispute, he cannot speak at funerals as the headman, he cannot use the title of Headman to represent Ntabazinduna anywhere and He cannot carry out his duties or exercise his powers as contained in the whole of the Traditional Leaders Act. Mathilika Khumalo remains a Headman only in name with no power or authority at all,” said Chief Ndiweni.

Chief Ndiweni added, “Retaining just the title of headman to Mathilika Khumalo ensures that the title remains in the clan Khumalo of Ntabazinduna because after adjudication one of them will be given the full title of the headman and its accompanying authority and power.” 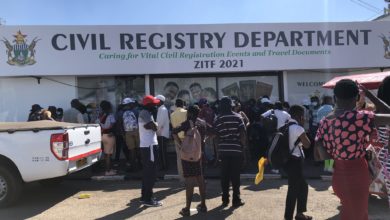