There are fears that Constituency Development Funds (CDF) meant to benefit Mabheka Primary in Gwanda were allegedly misused, as the school’s construction project has been lying idle for more than five months.

Gwanda Central received ZWL$100 000 from Treasury for its CDF in July, of which a decision was made to purchase building materials and rehabilitate the primary school.

But to date, only 150 bags of cement were delivered to Mabheka.

CITE visited Mabheka Primary School alongside a social audit team from Transparency International Zimbabwe last week Thursday and found no progress, save for the 150 bags of cement.

In an interview, Mabheka headmaster, Tsumbedzo Moyo, confirmed the school only received cement from the CDF while parents mobilised themselves and donated bricks.

“From the 150 bags of cement, we are molding bricks for constructing the foundation. The bricks that are here were donated by parents but when people see them, they think these were bought under CDF, which is not the case,” he told CITE.

The headmaster added that the school was not informed when other materials would be delivered but surprisingly were given receipts as proof that the building materials were purchased.

“We do not know when the other material, which is another 150 bags of cement, would be delivered. The local CDF committee just told us they will come back soon,” Moyo said.

It also emerged that the school had no architectural plan yet, as it was struggling to receive approval from the Ministry of Lands, Agriculture and Rural Resettlement.

Mabheka Primary School was built in 2001 during the fast track land redistribution programme.

Currently, the school has 217 students who share two classrooms and are manned by seven qualified teachers.

“The school was initially built without a site plan and that has become sort of a hindrance,” said the headmaster

Reached for comment, Gwanda Central Member of Parliament, Patrick Dube, claimed the building material for the block was purchased and it would be soon delivered to the school.

“The building material for the block was purchased a long time back and it is with the supplier,” the MP said.

He noted that all the cement could not be delivered at once, as his team had a small vehicle.

“We only delivered 150 bags of cement because the vehicle used for transportation was small but when I spoke to the committee members they assured me, the rest of the materials would be delivered to the school sometime this week,” Dube said.

“I am planning to visit the Rural District Council so that its planners can sort this issue immediately otherwise the cement would be damaged if it is lies unused for a long time,” the MP said. 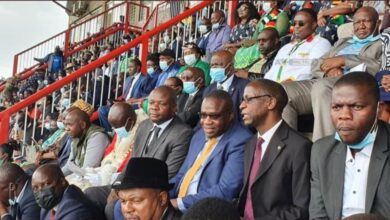