Bulawayo residents have expressed concern and fear over the city’s status as a “Covid-19 epicentre” amid deteriorating health care service provision at its major referral hospitals and quarantine centres.

The country’s second largest city is leading in the total number of cases with 483 confirmed cases and 12 deaths followed by the capital Harare with 465 cases and eight deaths.

A resident Sibusisiwe Moyo, in an interview said despite the increase in the cases, the restrictions seems to be more relaxed, increasing fears that the rate of infections could spiral.

“In terms of the public transport, there seem to be nothing being done with the overcrowding that occurs there. It will be not be surprising to witness an upsurge of the cases in Bulawayo in the coming weeks,” said Moyo.

She said the authorities need to be more serious when it comes to enforcing the guidelines to limit the spread of the virus.

A nurse in Mpilo Central Hospital said while tests were conducted last Tuesday, they feel exposed as those who were found to be positive when the results came back on Saturday were only taken to quarantine.

“We are very afraid of the virus, but the most scary part is that before the positive cases were taken to quarantine, they were allowed to move out and about, potentially spreading the virus wider, as they were using public transport to and from town,” said the nurse.

She there is a need for hospital authorities to take the responsibility of controlling the spread of the virus seriously, otherwise a “disaster shall strike soon”.

Responding to concerns that the Covid-19 cases at UBH were as a result of negligence, acting UBH Chief Executive Officer, Dr Narcissus Dzvanga said they were doing everything to ensure 100 percent compliance to personal protective equipment (PPE) standards from the World Health Organisation (WHO).

World Health Organisation (WHO) has long since warned on shortage of PPE endangering health workers worldwide as doctors, nurses and all other frontline workers are at risk of contracting Covid-19.

“It’s only those who were working in that ward who know whether they were wearing PPE all the time or not, I am almost certain that they knew the importance of  complying 100 percent all the time said Dr Dzvanga.

He said the hospital has adequate PPE but if the staff is not going to wear the PPE they are going to get infected.

“It’s not true that the initial case could have emanated from the hospital setting because it could be at home, at a wedding or in a kombi. We can only conclude that further infections were from the hospital because the numbers seemed to be concentrated in one ward said Dzvanga.

The government through the public transport company ZUPCO has been struggling to provide adequate transport, with many people crowding for the few available buses, in direct violation of social distancing measures.

The troubles in the city’s health care sector have been compounded by the strike by nurses owing to poor working conditions, especially low remuneration.

There are also reports of overcrowding and lack of testing, in some of the city’s quarantine centres with some patients saying the situation was exposing them to Covid-19.

Some of the returnees housed at Khumalo Hotel alleged they had gone for more 14 days without testing, as no clarity was made by officials on when they would be tested.

According to government policy, returnees are subjected to mandatory 21 days with testing to be done on Day One, Day 8 and Day 21. 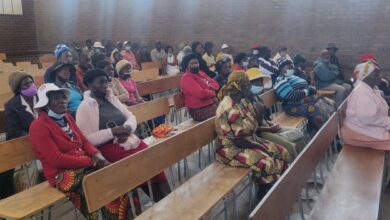 No to bambazonke! Govt must decentralise COVID-19 related tenders