Despite Zimbabwe having gone through a number of crises since independence in 1980, regrettably, the country’s ruling political elite has never at one point in time acknowledged the existence of any crisis, a former cabinet minister said Wednesday.

Zimbabwe is today facing a crippling political and economic crisis, which has attracted the attention of the international community.

However, the Zanu-PF-led government maintains there is no crisis in the country, claiming Zimbabwe is being demonised by her detractors and economic saboteurs.

Speaking during a CITE virtual public lecture on the crisis in Zimbabwe, Professor Jonathan Moyo, a former cabinet minister in late former president Robert Mugabe’s government, said the denial of the existence of a crisis in the country by the powers-that-be was not something new.

“Zimbabwe’s officialdom is notorious for not acknowledging any crisis,” said Prof Moyo.

“It has never at any point in the life and history of our country acknowledged the existence of a crisis. As far as the official line is concerned, it is immune from crisis. It is a kind of paradise on earth. The tendency of the officialdom is to at least present the country as one that has not really gone through any crisis since 1980.”

Prof Moyo said the authorities in 2017 failed to acknowledge that the military coup which deposed Mugabe was a crisis.

“There was a crisis in the republic,” said Prof Moyo.

“But even with that intervention which deposed President Mugabe and imposed Emmerson Mnangagwa as President of the country, really ZDF and Zanu-PF themselves did not acknowledge the intervention as a crisis. I think it will be fair to say in as far as Zanu-PF is concerned and ZDF which has become one and the same thing with Zanu-PF, the word crisis is a bad word. It is something that others suffer but not them, not Zanu-PF, not ZDF and certainly not Zimbabwe under Zanu-PF.”

Evidence on the ground, Prof Moyo said, points to the existence of a crisis in the country despite denials by government officials.

“But of course we know that the Zimbabweans today, are in fact, if we were to use the precedent of the ZDF intervention in 2017, we have not seen in our country an anxious and despondent population as Zimbabweans are today,” bemoaned Prof Moyo.

“If anxiety and despondency are the basis of intervening and if as a rule ZDF intervenes when Zimbabweans are anxious and despondent, I don’t think there will be a time equivalent to what is going on today because it is a self-evident fact that the country is in the jaws of a crippling crisis. This is so for many reasons.”

He cited the shrinking of the economy by 8 percent, seven million Zimbabweans living from hand to mouth, unemployment as high as 90 percent and over six million nationals residing outside the country as ample evidence of the existence of a crisis in the Southern African nation.

“I suppose it is fair to say that the denial of the crisis by the government, by Zanu-PF and by the ruling political class is in itself a crisis,” said Prof Moyo.

“It is probably the most unfortunate part of the crisis because in the civilised world the responsible authorities are often the first ones to accept the crisis and commit themselves to its resolution.”

 Teen charged with murder after stabbing death in Nyamandlovu 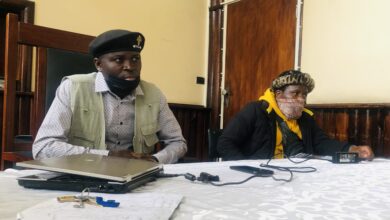 MRP speaks out on persecution as another member faces jail time