Zimbabwe`s food insecurity situation is expected to increase from the third quarter of 2020 to early 2021, largely caused by low grain production and high food prices, the latest Food and Agricultural Organisation (FAO) report has indicated.

This development would most probably see more households struggling to acquire food, as commodity prices continue to increase sharply in addition to sustained currency weakness and low domestic supplies that further exert pressure on the prices.

The Covid-19 pandemic has also hit many people hard, with companies downscaling, jobs lost, with small businesses and the informal sector struggling to survive, forcing most households to reign in on spending.

In a GIEWS Country Brief for Zimbabwe dated June 25, 2020, FAO said maize production was estimated at below average in 2020 due to poor weather conditions and limited access to inputs, which would require large quantities of cereal to be imported in 2020 to 2021 to meet demand.

Before the Covid-19 outbreak in the country, 4.3 million people were already assessed to have been food insecure in the February to June 2020 period, of which 45 percent was the rural population, according to the latest IPC analysis released in March 2020.

“Considering the negative effects of the Covid-19 pandemic and the associated containment measures, the prevalence of food insecurity is expected to increase from the third quarter of 2020 to early 2021,” said the food organisation.

“Shocks on both the demand side (reduced household incomes due to an expected economic contraction) and the supply side (logistical bottlenecks hindering the normal flow of food commodities) are expected to curtail the households’ access to food.”

While there was a small upturn in the cereal harvest, production in 2020 remains below average, which means farm-derived incomes are also likely to remain below average.

FAO noted that harvesting of the 2020 main season cereal crops, mostly maize, is expected to conclude by the end of June and production was estimated at about 910 000 tonnes which was 25 percent below the five-year average ( although higher than the previous year’s low level).

“The reduced output is primarily the result of low yields, with the national average estimated at 0.6 tonnes per hectare in 2020 compared to a five-year average of nearly one tonne per hectare.”

Due to a second consecutive year with a below-average cereal output and low level of domestic stocks, FAO said cereal import requirements in the 2020 to 2021 marketing year (April/March) are estimated at 1.1million tonnes, more than 50 percent above the five-year average.

“This quantity is mostly maize grain, estimated at over 750 000 tonnes, nearly double the average. In addition to the increased import needs, there are concerns regarding the country’s ability to access international supplies given the shortages of foreign exchange reserves and the loss of value of the national currency that has inflated import costs,” said the food organisation.

In 2019, the World Food Programme (WFP) said 7.7 million people in Zimbabwe – half the population needed assistance as the country was plunged in severe hunger caused by drought, flooding and a macro-economic meltdown.

The country in 2019, had for the third consecutive year, experienced drought — the worst the country saw in 40 years while forecasts did not suggest there would be more rain – critical for the planting season. 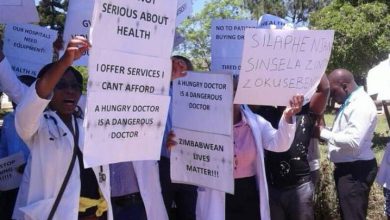 Doctors intensify strike despite abduction of their leader