The bone of contention is that Hanana is based outside the country, so cannot do his duties well and that his nomination was faulty, as it is alleged he was not a party member for the stipulated three years.

This development comes days after five members took ZAPU to court challenging the nomination and subsequent election of party leader Sibangilizwe Nkomo, demanding that an extraordinary congress must be held within three months to elect a new president.

Sibanda’s lawyers, Mathonsi Law Chambers, have written to the ZAPU’s National Executive  Committee (NEC) informing them of their client’s intention to institute legal proceedings in terms of the party’s Article 8:19 constitution

“We refer to the above reference and advise that we represent Mr Major Sibanda, membership number 0100015. Our client has instructed us to write to your good office to seek to leave to institute legal proceedings in terms of Article 8:19  of the party constitution,” said the legal counsel.

“Ours seeks to challenge the nomination and subsequent appointment of one Mr Mthulisi Hanana, as Secretary General that took place at an elective congress that was held at Bulawayo sometime in October 2021.”

Sibanda’s lawyer said his client was contesting Hanana’s appointment on the basis that he did not qualify to be nominated and elected, as he had not been a party member for the stipulated three or more years following grounds.

“His election violated the constitution which states that for any person to be eligible for nomination and election as the secretary General, he or she must have been a member of the party in good standing for a period of three years or more. It is common cause that Hanana does not satisfy that requirement,” said the legal counsel.

Through his lawyers, Sibanda argued he was nominated by the Botswana province, which he cited as “grossly irregular.”

“At that time, Botswana was not recognised as a province of the party, therefore nothing can come out of something that is non-existent. From the above mentioned, it is our client’s strong view that the nomination and the subsequent appointment of Mr Mthulisi Hanana, as the Secretary-General is a nullity for all intents and purposes,” Sibanda said.

He also asked ZAPU to respond to his lawyers within seven working days of receipt of this letter, dated July 25, 2022, to proceed with the case.

“Failure to do so we shall approach the High Court of Zimbabwe for an order compelling your office to furnish us with a response,” said Sibanda’s legal counsel.

In an interview with CITE, ZAPU National Spokesperson, Msongelwa Ndlovu, said all these challenges were emanating from individuals who were unhappy that the Nkomo administration was reviving the revolutionary party.

“Yes, Hanana was a ZAPU member. We have internal saboteurs who are not happy with the progress the party is making. Their wish is for ZAPU to remain an elitist organisation with no members but top heavy as a briefcase entity,” he said.

“This administration understands that ZAPU is those people in the villages, towns and cities. It is them we serve and it is them who will save their party from these saboteurs.”

Sources claimed this is not the first time Hanana has received opposition, as a vote of no confidence was once attempted before on the grounds that he was not based in Zimbabwe but in South Africa.

“The assumption was Hanana would perform badly as a party secretary general because he does not stay here,” sources said, further alleging that ZAPU was under attack.

“The strategy here is to reverse the 2021 congress outcomes using the courts as some elements, especially leadership, are not happy with the progress made so far.” 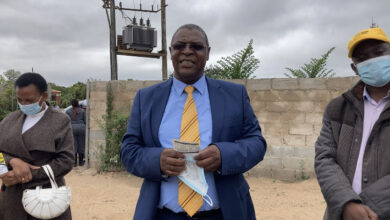 Schools should not turn away learners: Mathema