Ndabezinhle Sibanda watched helplessly as his neighbour’s life was being sought after by a raging bull elephant in Mkhosana, Victoria Falls.

Sibanda said his neighbour, identified as Reason was attacked in the middle of the night on Monday by the stray elephant.

Such scenes have become a daily occurrence in the resort city as stray elephants continue to terrorise locals.

“He had just arrived at his home and that elephant had been angered by people at night who had attempted to chase it away by beating drums, so when he arrived it started chasing him,” Sibanda said.

“He ran and what saved him was a huge pile of sand which impeded the elephant from harming him.”

Residents continue to lose their relatives and their property is often damaged by the marauding wild animals.

Another victim, Nobert Mahoza of Aerodrome said on the same night Sibanda’s neighbour was being attacked, another bull vandalised the precast wall and destroyed his crops.

“That elephant has been a problem around this area as it moves around looking for vegetables and crops to eat,” Mahoza said.

“The night it came, it destroyed my wall and after gaining entrance, it ate my pap-paw fruits that we nearing ripping and it also ate my maize crop in the backyard.”

Mahoza said he contacted Zimbabwe Parks and Wildlife Management Authority (Zimparks) and they promised to track it down.

“They came carrying a gun and asked about its whereabouts, but I doubt anything was done to it as they always wait for one of these elephants to kill someone before taking action,” he said.

“I tried to explain to them how residents are struggling and the amount of loss they have incurred due to these elephants, and we hope that one day they will be able to understand and act swiftly.”

In the same suburb, another resident had his Jojo tank ripped off as another bull looked to quench its thirst.

More so at the Victoria Falls Hospital, in Chinotimba, health staff reported that the problem elephants have over the weeks have been invading the hospital’s premises eating vegetables meant to benefit admitted patients. 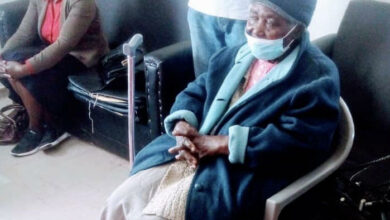