Nkwalini villagers in Sipepa, Tsholotsho, Sunday, witnessed an emotional but groundbreaking exhumation ceremony of the remains of a young couple shot dead during the height of the Gukurahundi atrocities in 1983.

The deceased couple, identified as Justin Tshuma who was aged 32 and his 21-year-old wife Thembi Ngwenya was buried in a shallow grave a few metres from the railway line where they were waylaid by the Fifth Brigade soldiers and shot dead.

A local villager, Bernard Mpofu who later changed his surname to Mahlangu, with three other villagers were summoned by two police officers who ordered them to bury the lifeless bodies.

They were buried with the only possessions they had with them at the time, an umbrella and a Supersonic radio. 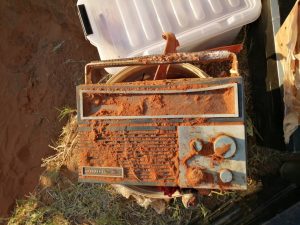 These possessions were also found in the grave as their remains were exhumed.

Relatives narrated to CITE how Tshuma who was working in Bulawayo during the Gukurahundi period, grew fearful for his family safety and travelled to his rural Tsholotsho home to pick up his wife Thembi.

They left their 2-year-old son in the care of his paternal grandmother.

At that time, Thembi was said to be pregnant with their second child.

During the exhumation process, a tearful Mahlangu told the gathering that the two were shot at close range on their abdomen.

The exhumation was conducted by Ukuthula Trust (an expert organisation in the field of pathology), in the presence of officials from the National Peace and Reconciliation Commission (NPRC), family members and villagers.

The village head, Alec Mcetshwa Sibanda who witnessed the event, told the gathering that, “it was necessary for the Gukurahundi perpetrators to seek forgiveness from victims and heal their wounds.”

Although Ukuthula Trust has been involved in exhuming bodies since 1999, the exhumation event in Tsholotsho was the first to be publicly covered.

Director of the organisation, Shari Eppel who spoke to both families at length about the process, said before the exhumation could take place, a lot of research had been conducted.

Eppel said family members were brave for pioneering this event in Tsholotsho, which could encourage more people to come out and ask for the same for their late relatives.

The delicate exhumation process started around 11 am and ended around 4 pm with the team starting from the point where Mahlangu claimed the feet of the deceased had been placed to avoid hitting the skull bones.

Eppel who was leading the process said the remains will be taken to the laboratory for further examination.

“I suspect the skull is compromised, which might have been caused by a bullet through the head or could be post mortem damage. This is why we have to conduct tests at the laboratory. A lot of bones around the face and eyes were missing, which could be soil damage,” she said.

The director noted that every bone exhumed would be inventoried.

“There are 206 bones in the human body, we will count and check every single one in the checklist. We will make sure we haven’t left a single bone behind we then take to laboratory.

“The bones will be dried, as they are a bit damp, clean them then start analysing for what we call a profile. This means we can measure bones, analyse them and it will tell us how old these people were at the time of death probably with a fair degree of accuracy,” Eppel said.

NPRC chairperson, Judge Sello Nare told the villagers that they now free to conduct reburials and give decent burials to their relatives.

“Please forgive and be healed by what has happened today. I encourage you to pass the message to others about the reburials. We will conduct outreaches but due to our limited numbers, we will be unable to reach all areas. Let us unite around this process” he said.

Beatrice Ngwenya, young sister to late Thembi said the family would now find closure now that they had found their sister`s remains.

Amon Joseph Tshuma, the young brother to late Justin, who was learning at West Nicholson at the time of his brother`s brutal murder, added that he felt some sense of relief after the exhumation process, as it meant the families would award their relatives a decent burial. 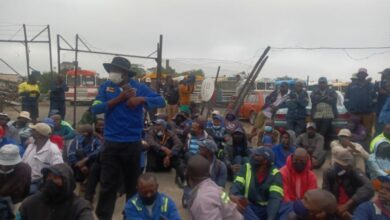