Some safari operators in Matetsi have raised concern over a deal between the  International Fund for Animal Welfare (IFAW) and the Zimbabwe National Parks and Wildlife Management Authority (ZimParks) which they say will be harmful to wildlife conservation efforts in the country.

According to a memorandum of agreement signed on September 30 last year, IFAW will build on activities started nearly three years ago on animal rescue, rehabilitation, and release through their local partner, Wild Is Life (WIL).

“The pioneering work by IFAW and WIL has already proven to be strategic for Zimbabwe and offers the opportunity for expansion to advance landscape-level conservation covering the Hwange-Matetsi Ecosystem in northwestern (NW) Zimbabwe as part of this conservation partnership,” read part of the agreement.

“Based on the MoU, IFAW will work together with ZimParks to advance wildlife conservation and protection; support animal rescue, rehabilitation and release to the wild; support research to inform solutions to enhance the persistence of elephants and other wildlife species in a connected network of protected areas. Additionally, it will complement this with the systematic engagement of local communities in the immediate environments of the target areas.”

In this partnership, IFAW will focus on the NW Zimbabwe Protected Area complex anchored around the Zambezi and Victoria National Parks designated UNESCO Natural World Heritage Site, the 14,000 km2 Hwange National Park, and other land units including the Matetsi Safari Area complex and adjoining CAMPFIRE communities.

“This is a commitment to collaborate with ZimParks to secure wildlife and promote human well-being in an approximately four million-acre landscape that is a key anchor to the KAZA TFCA and home to Zimbabwe’s largest elephant herd.”

However, some of the operators who spoke to CITE claimed IFAW was involved in large scale corruption in Kenya where they allegedly paid bribes to top Kenyan Wildlife officials to obtain access to Kenyan wildlife assets and they were concerned that they have done the same thing in Zimbabwe.

“We wrote to the Safari Operator’s Association of Zimbabwe (SOAZ) who took the matter up with the director-general but never got a response. As Matetsi stakeholders we wrote to  IFAW requesting disclosure of their dealings with ZimParks. The main issue is that IFAW were involved in large scale corruption in Kenya where they paid bribes to top Kenyan Wildlife Officials to obtain access to Kenyan wildlife assets. We are concerned that they have done the same thing here,” the operators said.

They added that the project will be detrimental to the country’s tourism sector.

“This will displace Zimbabweans and put many in the industry out of work. It is reverse indigenisation….It’s criminal! These American Animal Rights groups are recolonising Africa with their eco-colonialism. ZimParks is selling our children’s legacy for a piece of bread! No transparency, no consultation with our communities.  Just act!

“They published this map showing their intended expansion which includes our productive areas. The map shows they are already in control of Hwange National Park and Pandamasuie Forest area with the targeted areas in yellow. It’s all a scam for them to raise money from their donors…,” they said.

ZimParks spokesperson Tinashe Farawo refuted the claims and urged those with grievances over the deal to approach the police or the Zimbabwe Anti-Corruption Commission (ZACC).

“Year in year out by the auditor general since 2019, we have never been found wanting which means we are doing something right. If there is anything they think we are not doing well, they must also report to the police or to the Zimbabwe Anti-Corruption Commission so that we are investigated and if there is any problem we are arrested,” said Farawo.

“The issue is that we are doing…we are trying to conserve our wildlife in the best way possible. You all know what happened over the last two, three days,  we rely on tourism to fund our operations and tourism was just as good as dead. It was a disaster, there was nothing.”

He said IFAW has provided the necessary support to revive the tourism sector.

“But we have what we are now calling conversation partners and this includes International Fund For Animal Welfare. Its been helping us in a big way. If you go to Hwange now, the distance which was taking the whole day from Hwange main camp to Makona. A hundred-kilometre journey was taking us the whole day but because IFAW assisted us to construct two roads it is now taking three to four hours,” said Farawo.

“There was a road which was going to a traditional leader, a chief in Tsholotsho from Makona it was only a 10km road that was taking us… but now that road has been fixed. Our ranger’s houses are being fixed, being rehabilitated, they are being constructed.

They have donated vehicles for us that we can move, reacting to problem animals, assist our communities and all other things.

“We are not in the process, we don’t want to ban hunting. No one is going to ban hunting and its not on the agenda. We have never discussed that with IFAW and neither have they raised it, but the reason they are working with us in the best interest of wildlife. We are too busy relying on more tourism sorry. Tourism was dead, where do you think we get money.

“We did not get funding from central government and in fact government wants money from us as in terms of shareholding, but we don’t get any single cent from the government,” he added.

Sharon Hoole defended the deal saying said they will always be those that resist change.

“Matetsi? What used to be the cornerstone of CAMPFIRE, rich in opportunity for communities, is now stagnant, a cesspit of corruption and mismanagement.  A cartel of consumptive tourism operators, without ethics all up in arms, using evocative language about take over, to provoke resistance,” she said.

“Why? This massive investment of Green money opens up opportunities for communities to balance the true meaning of CAMPFIRE. In Zimbabwe IFAW have tangible evidence of their commitment and investment into communities opening up education, empowering local applicants to develop conservation strategies.”

She said IFAW has created local employment and the deal will spur development in teh area.

“They have created real employment. The ZEN Project, a joint venture with Zimbabwe Elephants Nursery in the Pandu Musie Forest area, taking rehabilitated Elephant orphans and releasing them back into the wild, infrastructure development and investment into communities is evident and on going,”she said.

“The Room to Roam project goes way beyond logos on rangers uniforms, it will bring a massive investment Green Money and attract contributions and asset building opportunities which will enable inclusion in the process for rural communities. And for those working in conservation real jobs are on the horizon. The investment will be in local empowerment and skill sharing so brush up on what you know and learn more.” 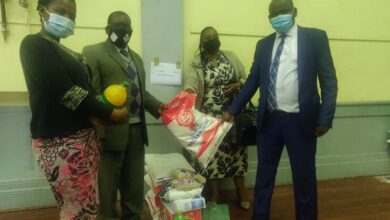