Bulawayo residents are complaining about overgrown grass which they say is being used to dump garbage.

This issue was raised at a Ward 8 meeting in Mzilikazi, where residents emphasized the importance of maintaining roadside vegetation, saying that overgrown grass in and around town was a ‘disgrace’ because it violated environmental rules and impaired visibility for both pedestrians and motorists.

The unkempt grass also encouraged individuals to dump trash, according to residents, who stressed that, while it may seem an insignificant issue, long grass is dangerous.

“There could be snakes lurking in there, while all sorts of rubbish are thrown there including faeces’ as some people relieve themselves behind the bushes,” they said.

Residents also questioned why the local authority was taking time to cut the tall grass.

“We are concerned about the growth of vegetation because people are dumping their waste and hiding the rubbish there. Some actually stuff the waste under the long grass. Why isn’t the city council cutting the grass? Whose responsibility is it to that grass,” said a resident identified as Sibanda.

He further stated that some residents who attempted to slash grass were questioned by others as to why they were doing so.

“You must clear that grass,” Sibanda urged.

BCC Cleansing Supervisor in charge of Wards 7, 8, 10, 11, 15, and 16, Gladys Moyo,  said their department’s mandate was limited to littering and domestic refuse.

“Vegetation falls under the Parks department is one that must slash that grass. Our department focuses on waste,” she said and handed out the contact number of the Senior Parks Officer who residents must contact for the slashing.

However, residents argued that it was the responsibility of the local authority to deliver quality services.

“Are you saying we must call them? I think it’s your responsibility. As residents can we call Parks to say come cut that grass, does that work?  Isn’t that your job there are many places with grass around Bulawayo, has anyone ever given instruction to the council really,” said Samuel Chikwize. 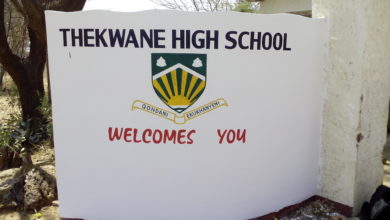