Moton Malianga, one of the most senior anti-colonial nationalists in the early 1960s when Zimbabwe’s quest for independence ignited, passed away on January 15.

Malianga was the founding Vice-President of the National Democratic Party in January 1960.

From 1960-61, he was literally the second-most senior figure in the struggle, serving as founding Vice-President of the NDP behind Michael Mawema and later Joshua Nkomo.  When the NDP was banned and reconstituted as ZAPU in December 1961, Malianga’s personal power began to wane as he simultaneously became emmeshed in numerous legal encounters with the Rhodesian state.

While Nkomo continued as the leader of ZAPU, Tichafa Samuel Parirenyatwa emerged as the second-leading figure in the party.  It was announced that Malianga would be ZAPU’s representative at the United Nations, but the appointment never appeared to be consummated, perhaps because of Malianga’s legal troubles.

Malianga maintained relevance as a prominent figure in the formation of ZANU in 1963, but shortly after his release from a lengthy prison stint in the mid-1970s, he remained with Abel Muzorewa when the Patriotic Front of Mugabe and Nkomo turned on the ‘moderate’ cleric.

While Malianga eventually retrieved his position in ZANU-PF, holding several Deputy-Minister positions during the first decade of independence and serving as a member of ZANU-PF’s Central Committee at the time of his death, he never reclaimed the peak of his political prominence in 1960-61.

While a forthcoming biography of Malianga by the musicologist Fred Zindi will likely offer new insights on Malianga’s accomplishments, one of Malianga’s greatest contributions to the struggle was his role in advancing the NDP’s international diplomacy.

When the NDP was established in January 1960, its President, Michael Mawema, was one of the few NDP officials who held a passport.  However, Malianga soon obtained a passport and began to navigate multiple continents – Europe, Africa, North America – in an attempt to win new allies in the struggle and secure materiel support.

In early 1960, soon after the NDP was formed, Malianga was part of a delegation to the UK that urged the British Government not to abdicate its oversight responsibility for the colony of Southern Rhodesia.  In light of Ian Smith’s unilateral declaration of independence (UDI) from British rule five years later, this was a prescient move.  On his return to Zimbabwe, Malianga visited west Africa, initiating some of the NDP’s first links with that part of the continent.

From there, his international contacts deepened significantly.  He led the NDP delegation to the 1960 conference of the Malawi Congress Party that saw Hastings Kamuzu Banda installed as life president of the party.

At the end of the year he was named to the Freedom Council, the main coordinating body of the Pan-African Freedom Movement for Eastern and Central Africa (PAFMECA), a pan-African organisation launched by Julius Nyerere in 1958.

The following year, his international diplomacy soared to even loftier heights.  In March 1961, he helmed the Zimbabwean delegation at the third meeting of the All-Africa People’s Conference in Cairo.  The Southern Rhodesian Prime Minister, Edgar Whitehead, was perturbed by Malianga’s fiery speech there and indicated that the NDP Vice-President’s statements were treasonous.

When the NDP experienced a split following the rise of the Zimbabwe National Party in mid-1961, Malianga was dispatched to west Africa to ensure the party did not lose backing across the continent.  He also represented the NDP at the first summit of the Non-Aligned Movement in Yugoslavia that year.

Thanks in part to Malianga’s efforts, the parameters of Zimbabwe’s nationalist struggle significantly widened in a very short timeframe.  As the authorities took increasing note of his activities, other figures came to the fore and Malianga’s visibility was reduced.

Fred Zindi and his publisher, SAPES Books, will hopefully soon provide us with the material to show how Malianga adjusted to his loss of power and again found a welcoming home in ZANU-PF after his dalliance with Muzorewa.

Brooks Marmon is a post-doctoral fellow in the Department of Historical and Heritage Studies, University of Pretoria.  Follow him @AfricaInDC. 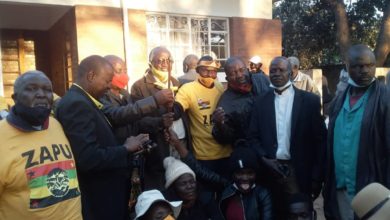