President Emmerson Mnangagwa has pleaded with the faction-riddled chiefs council to resolve their issues and work together.
Traditional leaders have been divided, particularly on how to deal with the Gukurahundi atrocities, with chiefs from Matabeleland arguing that the Chiefs Council of Zimbabwe had no capacity to handle the matter.
However, Mnangagwa pleaded for unity among the chiefs while meeting leaders from Matabeleland and Midlands provinces at the Bulawayo State House on Friday.

Visibly bothered by the tension, Mnangagwa requested to speak before his allocated time to address the “anomaly.”

He said he came to Bulawayo as a result of an invitation extended by the traditional leaders from Matabeleland but was not pleased with their request for President of the Chiefs Council, Chief Fortune Charumbira to be absent when they deliver their grievances.
“In terms of the programme, this is not the time I must speak I’m only requesting to speak because of some anomaly, which I see in relation to this gathering. First I was requested that Chief Charumbira be absent when you give your grievances. I am saying as President of the Republic of Zimbabwe, we need transparency and accountability, no secrets so Chief Charumbira will remain here,” Mnangagwa said.
He also expressed displeasure at the way some chiefs from Midlands were selected to attend the meeting, claiming those who were present were selected by tribe and he did not like it.
“Secondly I received a letter from some two chiefs requesting me to meet them here in Bulawayo with chiefs from Matabeleland North and South. I am now informed chiefs from my province were selected on basis of tribe I don’t like that. We, in the Midlands are united, we will not accept to be divided. The chiefs will remain in this indaba but they will not speak because of the basis they have been brought here,” Mnangagwa declared.
An aside – most eyes were on outspoken Ntabazinduna Chief Nhlanhlayamangwe Ndiweni, who was at the meeting having been absent in one held for Matabeleland North chiefs by Vice President Kembo Mohadi.

Before Mnangagwa spoke, Chief Charumbira had already excused himself from the meeting saying he had to attend a bereavement in Swaziland.
“I will not go into much detail but will leave provincial representations to present their issues. I want to mention that I’m supposed to be in Swaziland tomorrow, attending a funeral of an MP who passed on there and I will be representing the Pan-African parliament at the funeral. You will see me disappear as I have to go to Swaziland. The president has been well briefed,” he said
But before he took his leave, Chief Charumbira emphasised that unity in the county was crucial.
“I am here to set the tone then the meeting proceeds, we all agree we are really honoured that the president finds time to and interact with our institution. The provinces met yesterday (Thursday) afternoon and deliberated on issues they need to address to you. More so, what’s important as a country is we can’t afford disunity. We should work towards unity everywhere you are, including traditional leaders,” he said.
But Chief Charumbira did not ‘disappear off to Swaziland’ as he had indicated after Mnangagwa told him to stay put.

After these brief remarks, the meeting was closed to the media and were only allowed in after the deliberations.
In his closing remarks, Mnangagwa said chiefs had discussed four categorical issues.
“One is related to food security. The lack of food security in provinces which the chiefs have alerted government about and the drought impact in respective provinces.
“Second issue was related to socio issues such as education, road infrastructure, available and access of clean water. We dialogued and had conversation in respect to these however these challenges are not only found in the two provinces but are prevalent in others. Not all can be addressed overnight some will have quick solutions, other medium to long term solutions,” he said
The chiefs also raised issues of employment of staff in government and recruitment of young people in the security sector.
“They have pointed out areas, which are not satisfactory and I have assured them those weak areas should be corrected so that there is fairness in recruiting people,” Mnangagwa said.
As for the emotive Gukurahundi issue, Mnangagwa said the two provinces have put forward a similar method of dealing with the issue.
He noted that the major point which came out is the fact that the affected communities in which they preside in as traditional leaders are the ones ‘directly’ affected by incidents of Gukarahundi.
“Therefore it is necessary and made argument that in its resolution, they said we as government should create platforms where the chiefs should participate substantively, because it is the communities they preside over that were affected. Any other interest groups in this issue should not have silo dialogues but should not have single platforms where these issues can be discussed and resolutions for way forward agreed,” the president said.
Mnangagwa added that it was an “open discussion” and both had pledged to uphold unity.
Deputy Chiefs Council President Chief Mtshana Khumalo, in his remarks attempted to absolve the chiefs’ council from the tension emanating between them and chiefs from Matabeleland.
He claimed the provincial leadership were unaware that Chief Charumbira was not to be a part of the meeting, noting such thinking was the work of a few individuals.
“Since you Mr President brought it up, I will address the matter. It is not proper for us, as the chiefs’ council to talk to others without the full leadership. When we attend meetings all of us must be present. Whoever said Chief Charumbira must not be part of this meeting is wrong and since the president did not name those who said so, we will not press him to reveal them. It is wrong to ask someone of his stature to point fingers,” Chief Mtshana said. 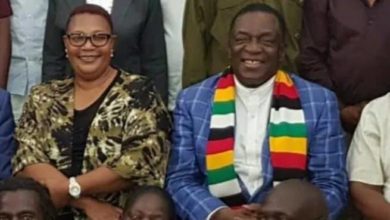