Victims of the January Shutdown protests that occurred a year ago say the government has made no real efforts to offer justice nor compensation to them after the alleged abuse they suffered at the hands of security forces.

The violent protests were triggered by a 130% fuel price hike announced by the government.

Protesters took to the streets in anger and barricaded most of the roads in the city. Supermarkets were looted and some of the infrastructure destroyed.

The government reacted by shutting down internet services and deploying the army ostensibly to quell the violence.

The city remained on lockdown for close to three weeks with cases of beatings of residents and human rights violations being recorded.

According to the Zimbabwe Human Rights NGO Forum during the period January 14-February 5, 2019, the Forum documented 1 803 human rights violations, including 17 extrajudicial killings and 17 cases of rape and sexual violence.

CITE tracked one of the victims, a self-employed mechanic from Emganwini Suburb, Mutshiwa Dlamini, who claimed he was brutalised by soldiers during the protests.

But to date, he has not received any update from the police concerning their investigation.

“The police didn’t come back to me or confirm anything. It is clear the government is responsible for authorising the deployment of soldiers yet from my knowledge, it is the role of police to handle civilians,” Dlamini said.

Dlamini, who was a staunch Zanu PF supporter before the protests, claimed he had dumped the ruling party as he cannot support an establishment that harms its own people.

“There was no compensation,” as he recalled how he suffered lacerations on his scalp, bruises on the abdomen, left upper limbs, back and lower limb.

He retorted that there was no rule of law in the country, as soldiers were allowed to run amok without punishment.

“The president claimed to be a listener so he should have asked soldiers why there were punishing people but he kept quiet,” he lamented.

Bulawayo MDC Provincial Spokesperson, Swithern Chirowodza, one of the party leaders arrested during the shutdown, spent close to a month in prison on charges of inciting public violence using social media.

“I was one of the few unlucky MDC leaders to have been arrested and detained at Khami Remand Prison on false charges. Many people were injured and one inmate died of wounds from beatings,” he said.

Chirowodza claimed the crackdown was pre-planned by the security forces.

“The Zimbabwe Congress of Trade Unions called for a stay away and thereafter dubious characters hijacked the peaceful protest action. It was Mnangagwa’s way of trying to portray the MDC as anti-business and this is keeping with his modus operandi. He is an abuser of human rights,” he alleged.

Civic society members stated that impunity and denial of access to justice to victims remained prevalent in the country, as authorities were failing to reign in on security forces.

“The victims can go to court, other than this, I doubt we will see anything meaningful coming from the state. There’s enough evidence to lay charges, file for lawsuits and claim compensation as victims are still nursing injuries or have permanent scars,” he said.

Mbuso Fuzwayo from a pressure group, Ibhetshu LikaZulu, stated it would be ambitious to think the state would address military attacks or human rights violations.

“Just recently the president made a joke on the use of the military on civilians. These soldiers were acting on instructions, so whoever instructed them cannot turn and prosecute them. The source of power to the ruling elites comes from the military,” he said.

“It’s in the Zanu PF DNA for masses to be bashed by these so-called security forces under the instructions of these gangsters masquerading as a government. There is no rule of law which protects the ordinary people. It is for the survival of those in power as both the army and police serve Zanu PF,” he claimed. 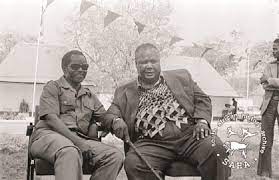