Students at Hillside Teachers` College in Bulawayo, Thursday,  staged a demonstration at their campus against the abrupt boarding fees hike by the college.

At the beginning of the 2019 term, students resident at the campus were required to pay $175 per term as boarding fees.

However, on Tuesday, the principal Linda Sibindi addressed the students informing them boarding fees had been increased to $450 with immediate effect.

The students were reportedly instructed to pay at least $150 before Friday and failure to do so will result in them being ejected from campus.

Incensed by the development, the students suspended lectures on Thursday morning to register their displeasure.

Police were called to the campus to contain the demonstration and ensure no violence erupts from the students.

When a CITE news crew arrived at the campus, the students were grouped at the parking lot under watchful eyes of the anti-riot police.

They would occasionally break into song and toyi-toyi around the campus.

Some of the grievances that students want the college administration to look at is the issue of tracksuits and student Identity cards.

First-year students said they were made to pay extra fees for tracksuits and IDs which have not been delivered.

“If they could not give us the tracksuits and ID’s then they should use that money instead of asking us for more money,” said one first-year student who spoke on condition of anonymity.

The students also complained about the quality of food they are served at the canteen.

“We eat meat once in a while otherwise it is either cabbage or green vegetables,” said another student.

Students were given contracts to sign agreeing to pay the new boarding fees, however, some of the students felt ambushed and resorted to a strike. 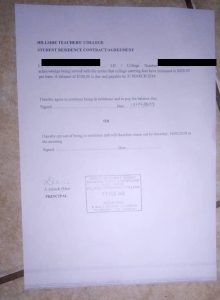 The principal Linda Sibindi later addressed the picketing students and promised to address some of their grievances. 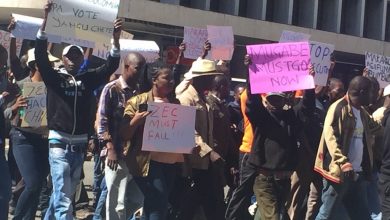