Hwange Colliery Company Limited (HCCL) says it has rescued 35 displaced families and moved them to their guest house following Saturday morning floods in the coal-rich town.

HCCL’ Corporate Affairs Manager Rugare Dhobbie said the rains that pounded the town from 6 AM until 10.30 AM were the first of their kind, putting families and their properties at risk.

The floods were reportedly severe at Number 1 and Senderella suburbs were most families and shop owners lost valuables worth thousands of dollars.

“Hwange yesterday received 139mm in 3 hours resulting in the drainage system being overwhelmed by flash floods,” she told CITE.

“139mm – these are heavy downpours if we are to compare with previous years usually the concession receives 50 mm or less. As HCCL, we are doing all we can to assist the affected families. We have started moving families to guest houses and other safe accommodation within the concession.”

Dhobbie said despite the incident, no life was lost.

“Let me highlight that of the affected families no one was hurt and they are being moved to safety.”

However, some survivors said they had to seek refuge on the nearby trees after their houses collapsed.

There was a temporary road blockade yesterday along Victoria Falls-Hwange highway near Senderella.

Dhobbie said the situation was currently stable as they have not received more rains since Saturday.

The Meteorological Services Department (MSD) had warned of severe floods in different parts of the country over the weekend. 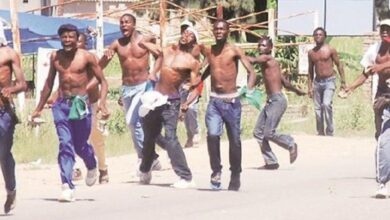