Residents in Hwange are up in arms with mining companies whom they accuse of failing to secure old coal dumpsites after a child was severely burnt by an underground coal fire yesterday.

The 8-year-old girl whose name could not immediately be established is reported to have gone to a nearby bush to relieve herself close to an old mine dump when the ground collapsed underneath her feet resulting in her suffering serious burns on both legs, stomach and chest.

The girl was later transferred to Mpilo Hospital in Bulawayo.

Residents said the lack of water and poor sanitation at most communal toilets in areas under HCCL concession areas is forcing them to practice open defecation near these old unsecured mine dumps.

“The lack of clean toilets is forcing many people to resort to using the bush to relieve themselves. You would find that these places are surrounded by coal dumpsites left many years ago by Colliery. Here in No. 3 (Makwika village) we have a serious challenge of water which affects the cleaning of toilets. I think action should be taken to provide enough water in the ablution blocks and the compound at large. Lighting in ablution facilities is another reason which should be addressed,” said a resident who identified herself as maNdlo.

“Greater Whange Residents Trust condemns the increase of burnt children at dumpsites and it appears Hwange Colliery Company is not doing enough to address these issues and we will definitely approach the company, EMA and government so that they address these issues. These children are left with permanent injuries, parents distressed, ” said Chima.

He said they were advocating for mining companies and stakeholders to address such issues.

“The last incident is that the child was burnt after avoiding using public toilets and had gone to the bush to relieve herself. We are pushing mining companies, EMA and other stakeholders to come up with an environmental platform to address such issues.”

Scavenging for coke at these dumpsites has also claimed two lives as residents resort to dangerous methods to eke a living due to the economic situation.

The child’s father, Andy Muzwiti could not be reached as he was said to be in transit to Bulawayo with his daughter. 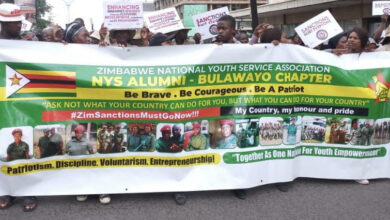