This figure indicates that GBV cases are on the rise despite advocacy work and constitutional obligations to stop abuse against women and girls.

Giving an overview of the cases dealt by Msasa Project in Bulawayo at a workshop organised by Hope for a Child in Christ (HOCIC) in partnership with UN Women to commemorate International Women’s Day Friday, Simelinkosi Mazwi said a major contributor towards GBV was economic hardships where men felt emasculated and turned on women.

This year’s International Women’s Day on March 8 is running under the theme: #BalanceforBetter aimed at gender equality, a greater awareness of discrimination and a celebration of women’s achievements.

“Msasa works on ending gender-based violence among girls and women in various areas and issues we receive from clients are the ones we use to advocate for positive change. My presentation is based on statistics that we have gathered as Msasa within Bulawayo in the year 2018 where we reached 2817 women. These women received psychosocial support and legal advice,” she said.

Of the total cases handled by Msasa, 2 372 were new cases reported while 369 women further received shelter support, which is another key component of the organisation.

“A total of 139 cases were new cases presented by survivors in the shelter. Some of these cases from the 369 were carried over from previous months. As long the client has not been reintegrated with a support system, we still remain attending to that case with the survivor under our care to prevent eviction,” Mazwi explained.

She noted that from the GBV experiences as reported by the survivors, most were physical assault, with women battered by fists and by various objects.

In some other cases, the woman would be beaten while evicted from her home.

“The total cases of this are 426 cases. Of these cases, only 165 had protection order applications that were filed and completed successfully in court. At times women won’t be so keen to proceed further to court and seek psychosocial support or probably couple counselling sessions”.

Mazwi said economic deprivation centred on 2 052 cases Msasa Project attended to, as caregivers faced challenges in payment of school fees for their children.

“From this figure, 1 290 maintenance applications were then filed in court,” she confirmed.

Sexual violence which culminated in marital rape as well as rape made up 72 cases Msasa handled.

“Some of these cases were referred to from other districts -Nkayi, Matobo, Lupane and Bulawayo. Most perpetrators in these cases were relatives and some of the cases were delayed reports as survivors sought services already having fallen pregnant. When one delays reporting a case of rape, the end result becomes pregnancy even HIV,” said the Msasa official.

“Some survivors could not access the legal termination of pregnancies due to the time they reported the cases while the process of the service itself in court takes long for it to be finalised.   As such at the end of the day, when the court order is passed out the period for one to receive the termination would have elapsed.”

Mazwi lamented that there was a delay in rape case management as courts took longer to complete.

She added that police systems were also insensitive as women complainants were tasked to bring the respondents when they could be summoned depending on the nature of the case.

“Women allege they are given notes addressed to the same perpetrator and they lose heart to seek protection from police and opt for Msasa,” Mazwi said.

To mitigate against such issues, Msasa has held a multi-sectoral meeting with police, courts and health sector for better service provision.

Meanwhile, HOCIC is implementing a SASA (Start Awareness Support Action) programme in Matobo seeking to reduce violence against women and HIV in the District.

SASA is a Swahili word meaning stop and the programme would be done through training of community activists and gender champions on the SASA approach, raising awareness on the benefits of nonviolence, advocacy efforts and conducting social audits on access, service delivery and utilisation of GBV services. 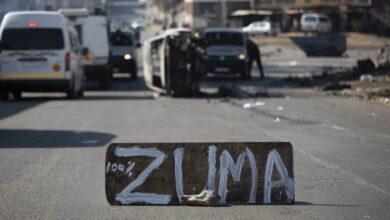 The day some immigrants joined in the looting in South Africa