This comes after the Bulawayo City Council (BCC) announced that there will be an interruption in refuse removal services due to fuel shortages experienced in the country.

Areas to be affected include Mahatshula, Woodville, Killarney, Emhlangeni and part of the Central Business District.

“Residents are encouraged to keep the city clean and desist from dumping refuse in open spaces. Uncollected refuse should be kept within household properties and will be collected when refuse collection resume,” said Bulawayo Town Clerk, Christopher Dube in a statement.

In such cases residents usually opt for temporal dumping sites which they create to dump waste instead of keeping it in their households.

However, in an interview with CITE, EMA Bulawayo Provincial manager, Decent Ndlovu revealed that waste can be managed at household level.

“Reduction is a way of waste management where residents reduce the way they accumulate waste through composting and through what they prepare for meals,” he said.

He said recycling is another method of waste management.

“There are various strategies that local authorities can employ to make sure land fill site do not fill up. They can control waste through waste recycling.

“If waste is recycled it means it does not go to landfill and hence the landfill will survive in terms of filling up,” Ndlovu said.

He said residents can also use waste to make other re- usable materials.

“We can have some tyres re-used to come up with basins for our flowers or as flower pots”, he said.

Ndlovu said the residents can also refuse some of the waste.

“People can refuse some of the waste that is to say where can we take the waste such as plastics, kaylite and diapers. Something can be done so that it is reduced”.

“The sorting of waste at source is another method. This means if waste is sorted at source some of the waste is removed before it goes to land fill for recycling purposes for re-use elsewhere”.

“It means if there are sorting sites established takers can come and claim what they can re-use elsewhere, Ndlovu said.

Moreover, he said waste can be treated through use of banning of some of the materials.

“Restriction or banning some material come up with SIs. The most prominent one is S184 of 2012 on the ban of kaylite which means kaylite will not be coming into the country as these take years to degrade”, he said.

Ndlovu said waste create green jobs where youth and women can take up and be able to generate income for themselves.

“The issue is that we do not have transport for refuse collection due to fuel shortages affecting the country but we will notify residents when the services resume,” Mpofu said. 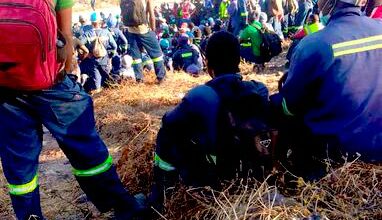