Villagers along Deka road which connects Hwange town to Zambezi River are concerned about the state of the road which has become impassable because of the damage caused by Chinese owned mining companies operating in the area.

The road passes through Chief Hwange village and is widely used by fishermen and tourists going to Msuna and Deka mouth and other areas downstream towards Binga.

It also connects to Victoria Falls via Jambezi along the Zambezi river.

However, the destruction especially on the first 30km from Hwange has almost isolated the whole community as even transporters charge exorbitant fares.

“We have been raising this over and over but nothing is being done. Driving along this road is a nightmare and to imagine that to go to town I have to use it makes me angry. Government should do something especially about these Chinese companies so they fix the road,” said Chief Hwange.

Villagers are worried about the level of exploitation of local resources by the Chinese whose companies employ a mere 10 percent of locals.

There have been concerns by Hwange residents about the importation of labour by a majority of the companies whose managers are from other provinces.

A village from Mwemba Blessing Shoko said the road is a death trap.

“We have no clinics or hospital in our area and people who fall sick have to go to Hwange and use the same road. The worst affected are pregnant women and to be rushed to Hwange is like being sentenced to death because of the road. We have no other road and soon we will be weaned off,” she said.

Matabeleland North Minister of State for Provincial Affairs and Devolution Richard Moyo said efforts are being made to engage Chinese companies operating in Hwange to fix their mess.

“We once summoned these companies and told them to develop areas they operate in. We realised that most of them are headquartered in Harare and those who are local have no voice over these issues. So i have ordered the District Development Coordinator to summon chief executives and owners of these companies and we hope soon we will

Besides destroying the road, companies operating in Hwange have also been accused of land degradation and polluting water bodies, especially on Deka River where fish have died before.

Villagers downstream have also complained about their livestock dying and experiencing stillbirths because of drinking polluted water. 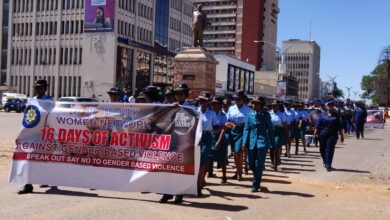