Bulawayo residents took advantage of the light rains that fell in most parts of the city on Monday to harvest rainwater amid a serious water crisis.

The rains came as a relief as the residents have been enduring days without water forcing them to resort to unsafe water sources.

Speaking to CITE, a Luveve resident Siphosenkosi Ncube said she was grateful for the rains as she was struggling to access water.

“We are grateful for the rains, they came at a time when residents are really struggling with water and are relying on boreholes,” said Ncube.

“I managed to fill up a number of containers through water harvesting. I am sure they will take me through the day.”

Another resident from Pumula suburb, Tendai Masara added that harvesting rain water will reduce the time they spent queueing for water.

“There was widespread thunderstorm activity across the country yesterday but amounts were generally less than 5millimetres. However, some parts of Harare Metropolitan Province received more than 25 millimetres followed by 19millimetres at Gweru, Thornhill Airbase 17 millimetres and 17 millimetres at Joshua Mqabuko Nkomo airport,” said MSD director Tichaona Zinyemba.

Zinyemba warned the public of violent thunderstorms and urged caution.

“The thunderstorms that occur now are very violent (strong winds, hail and lightning) typically the scenario that occurred yesterday. It is therefore important for the public not to expose themselves unnecessarily to the danger associated with these violent thunderstorms”.

“The question of significance I guess talks to whether farmers can plant or not. Generally, as the season sets in, October usually has erratic rain but may have localised heavier downpour and it is incumbent of farmers to know their soils and practice smart agriculture,” he said. 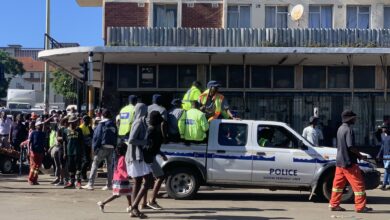