The Bulawayo Progressive Residents Association (BPRA) has questioned the criteria used by the Bulawayo City Council (BCC) in awarding tenders as some of the companies fail to deliver.

This comes after the city implemented a smart parking management system with Tendy Three Investments (TTI) whose operations have caused protests from the public over costs charged to motorists.

The residents’ association also underlined the outstanding Egodini Project, where Terracotta Trading (Private) Limited was contracted in 2016 to develop the mall at a cost of US$60 million, but six years down the line, residents say minimal progress has been made.

Speaking at a policy dialogue series organized by Public Policy Research Inst of Zim (PRIZ) in partnership with the Women’s Institute for Leadership Development ( WILD) on the function of public partnerships as a developmental and financing model in a devolved system of government: Overview of BCC and TTI, BPRA secretary for administration, Thembelani  Dube, said it was worrying how these contracts are negotiated.

“As much as residents appreciate the role of public partnerships, we are a bit worried about the way these contracts are brought to the citizens of Bulawayo,” he said.

“Let me hasten to say we all know for a city to run smoothly there has to be order and these parking management systems are not unique to Bulawayo. There are advantages and disadvantages that come with the parking systems but what we are concerned about is the approach that is done or followed by BCC.”

Dube said residents were sceptical of how these contracts were negotiated as most companies failed to deliver.

“We have fears of these companies that are brought in and contracts signed, noting that we have Terracotta that was supposed to improve Egodini but up to today, we are still not seeing much happening. As Bulawayo residents, our concerns are not that we don’t want development but we are concerned that because when you follow most of the contacts that Bulawayo gets into, we become a bit worried if there is no wide consultation done,” he said citing that BCC once bought ambulances in 2012 that were “never recovered.”

The BPRA administrator said residents would have loved to have broad consultations taking place concerning TTI so that they were not left guessing.

“Had it not been for residents to raise queries, we were not going to be sure whether the company belongs to local people because the information we had was sketchy. Hence, we had to make that noise to at least get the information we require,” Dube said.

Dube said although TTI and BCC had made changes to parking costs, the fees were still unsustainable.

“Maybe there is a need to zone the areas, from the core of the CBD up until you reach the periphery so that charges are affordable, considering that some businesses don’t have parking areas.”

The BPRA administrator added that had services and business operations been decentralised to other suburbs in Bulawayo, the city would have been decongested.

Another participant at the event questioned why BCC was outsourcing most of its services.

“I have been in Bulawayo from the 1970s when it was under a colonial government and the parking system was entirely run by the city council. Why is that city council could cede that operation, give it away, externalise instead of council entirely running it?” he asked.

“When you look at what is currently happening in the city, be it roads construction, housing development, servicing of stands, refuse collection – the city council appears to have given it up to other companies. What really is the city council entirely there for apart from water purification?”

Another resident who claimed to be familiar with company registration urged TTI to supply their deed returns for the past five years to prove it was really locally owned.

“A company can register in 2010, then people come and just remove directors but transfer shares then it’s said that company was registered in 2010,” he said.

“If TTI is a sister company with the one in South Africa, you don’t register the company in Zimbabwe until you are given a certificate of operation in South Africa, which is given by the Zimbabwe Investment and Development Agency and Deeds office, which shows the company uses the same name but is allowed to register locally after cleared by the Standards Association of Zimbabwe.” 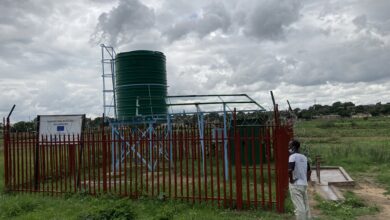