Two alleged armed robbers have been arraigned before a Bulawayo court facing charges of armed robbery and possessing gold without a licence.

The court heard the two were busted at Highlanders Clubhouse where they were trying to get a buyer for 889 grams of gold with a value of USD37 338.

Magistrate Mkhwananzi remanded the pair in custody to July 26.

Prosecuting, Nkathozo Dlodlo, told the court that on July 10 police officers pounced on the pair while they were roaming around in their car at Highlanders clubhouse looking for a gold buyer.

“From Maposa the detectives recovered 889 grams gold button, USD810, ZAR1000, RTGS681 while from Chatikobo they recovered USD631, RTGS142 and two cell phones. The two failed to produce mining documentation for the gold they were carrying,” said Dlodlo.

Dlodlo further told the court that on April 13, Maposa and another accomplice, Witness Hlongwane, and three other assailants broke into a house in Tshabalala where they pounced on a family that was sleeping in the early hours of the morning.

He said five men gang that was armed with machetes, knives and pistols demanded for money from the family.

“They tied the complainant to the headboard using a t-shirt before ransacking the house looking for money. They got away with ZAR700, USD560 and RTGS496,” said Dlodlo.

The State alleges the pair are also part of another eight-men gang that manhandled a security guard manning at Africa Steel in Belmont.

Dlodlo said the gang, armed with fire arms, golf clubs and metal rods assaulted the security guard and tied his hands and feet before they stole his two cellphones.

“Some of the assailants remained guarding over the security guard while the other went on to steal in the premise. They gained entry into the building by cutting off zinc on the roof and destroying the ceiling. They covered the CCTV with a cloth and ransacked the office but did not find anything to steal,” said Dlodlo. 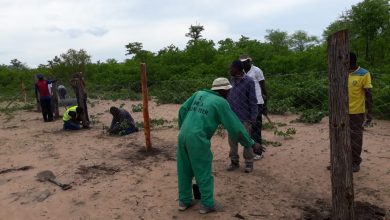