National University of Science and Technology (Nust) students have lamented the hike in accommodation charges ahead of the start of the 2019 academic year.

The university opens its doors for the first semester in March.

Due to high demand for accommodation, students usually secure accommodation early with property owners taking advantage of their desperation to hike rentals.

According to a survey conducted by CITE, most property owners in suburbs such as Selborne Park, Riverside, Sunninghill and Khumalo, who offer student lodgings, have hiked rentals by as much as 200 percent.

Other property owners are said to be demanding payment in foreign currency.

Nust Student Representative Council (SRC) president, Dennis Mwashita, confirmed the development, saying most students might find it difficult to pay for their accommodation.

“Landlords in Selborne Park, Riverside, Brentwood and other surrounding areas are now charging $150 to $200 bond per month,” said Mwashita.

“What is disturbing is that some of these landlords are demanding their rentals in United States dollars ranging from $40 to $50”.

“The only way forward is that Nust must urgently address the issue of accommodation because a lot of students are going to struggle to find decent accommodation”.

He added that the SRC has since approached the director of residencies on the matter.

“The University has confirmed to us that next week there will be a meeting between the Nust administration, SRC and the respective property owners,” said Azangwe.

Recently, the university denied reports that it was planning to increase tuition fees by more than 100 percent.

According to the proposed fees structure which was circulating on social media, the fees ranged from $1 695 to $1 815 according to specific programmes.

The university has already issued a directive that foreign students will be required to pay their fees in foreign currency. 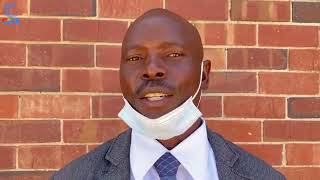